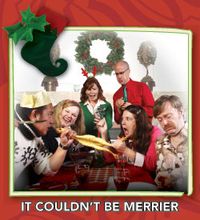 This was one of the best improvs that I have seen for a couple of years. The play was fun from beginning to end. Since the show’s theme is based entirely on audience participation, no two shows will be the same and this audience was very responsive and introduced some fun ideas. There were elves, Santa Claus, singing guests, a baker, a story teller and of course, a bad guy, the greedy toy company CEO.

The cast was terrific and quick to react to situations. I was not only impressed by the wonderful voices in the periodic bursts of song, but by the cast’s group effort at spontaneous harmonizing which, of course, is the essence of improvising. They also made good use of two white wigs as they created one character and then another, and at one point, one was put on backwards much to the delight of the audience.

We were taken on a plane flight during a lightning storm to visit the eastern European parents of one of the audience members, then to Australia and Japan. The accents were truly bizarre and the actors worked out presenting multiculturalism in a very appropriate and select manner. The cast created a pretty good Christmas story that kept us interested and entertained.

Even though the play is about Christmas and usually calls for the standard bright costumes of elves, Santa, and a magnificently decorated tree,the improvisers chose simplicity and good acting to create their theme. And that they did. After all, it is improv! They did have a decorated tree, a Santa wig, huge Santa pants, a green elf hat, presents, and an apron. The toy company CEO’s high forehead and wig was a hoot. What else could you possibly need?

The sound and lighting were done well and all in all, the performance in my books was a success. If you want your family and friends to get inspired early about the festive season, go watch and participate in this delightful and innovative improvisational comedy.