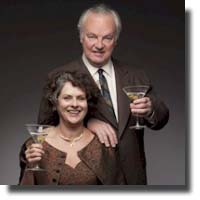 I was disappointed to have missed out on seeing Blackbird Theatre’s mounting of Who’s Afraid of Virginia Woolf? when it played at the Cultch early last year. After seeing essentially the same production last night at the Granville Island Stage, I no longer feel disappointment - not that this version of Virginia Woolf is bad – it’s great. Not seeing the play last year gave me the opportunity to see this incarnation with the benefit of fresh eyes. What’s more, I will no longer ruminate on Elizabeth Taylor and Richard Burton’s performance in the 1966 film when thinking about Edward Albee’s seminal work.

George and Martha, a New England couple in late middle age, whose tempestuous 23-year marriage is defined by constant caustic verbal battles. George is an associate history professor in a New Carthage university where Martha's father is the President. Martha is a lush – a loud lush who acts and reacts from base instinct.

On this particular Saturday night, when both are already fueled by excessive consumption of hard liquor, Martha invites Nick, a new biology professor and Honey his plain and puerile wife, over for a nightcap. As the evening progresses, Nick and Honey are plied with large quantities of alcohol, and become spectators in George and Martha's vitriolic parlour games, eventually becoming unwilling participants in an American form of schadenfreude. The terminal form of George and Martha's spousal cruelty comes in a “game” they call “bringing up baby” about their mysteriously unseen 21-year old son, whose birthday is on the following day.

George and Martha don’t just bicker: they taunt one another to the point of humiliation and as natural entertainers, produce their best (and worse) performances in front of an audience. Gabrielle Rose is stunningly spontaneous as Martha, though, at times leaning a little too close towards camp. Kevin McNulty is sublime as the sarcastic and all too self-aware George.

Craig Erickson acquits himself well in the difficult role of the increasingly smug Nick. Meg Roe, though perhaps having the least to do as the naïve Honey, delivers a delightfully playful performance.

The play’s tender and contradictory final scene shows an irrational interdependence of a married couple making the best of an ill-fated pairing.