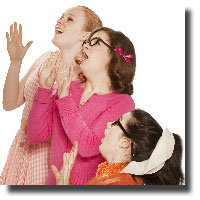 It was not without a little trepidation that I settled into my uncomfortable plastic chair at the Malkin Bowl open-air theatre. It wasn’t just the looming clouds over Stanley Park threatening rain. The fact is, I have never seen a worthwhile version of Bye Bye Birdie – most of which were community productions where the cast enjoyed the show significantly more than the audience.

I needn’t have worried on either count. The rain held off until within five minutes of the end and the large cast, mostly made up of emerging talent almost straight out of theatre school, filled the stage with movement, song, and sparkling choreography.

Director Shel Piercy plays this Theatre under the StarsTM mounting with all the satire that its worth, and really, that’s the only way such a cliché-ridden, outdated musical could work in 2011.

Inspired by Elvis Presley’s conscription into the Army two years earlier, this engaging, though hackneyed musical sees Conrad Birdie (Erik Gow) a rock and roll singer who is about to be inducted into the US army. His agents Rosie Alvarez and Albert Peterson (Lalainia Lindbjerg and Daniel White) concoct a plan to allow Conrad to bid a full final farewell to his loyal fans before disappearing from public view. They arrange for their client to take his much-worshipped rock persona to randomly selected Sweet Apple, Ohio and plant a “goodbye kiss” on teenage fan, Kim McAfee (Amy Jean Mcelwain) on the Ed Sullivan Show.

The best part of the show, are of course, the kids who bring energy and fervour to a fan club that its beneficiary hardly seems to deserve. Erik Gow, though possessing a passably pleasant voice, hardly looks the part of a sixties teen idol, who through the magic of musical theatre gets his sergeant’s stripes before his induction.

Daniel White ridiculously overplays the role of Albert, but that seems okay and even fits perfectly within Piercy’s burlesque framework. White turns self-deprecation into an art form with his nice little song n’ dance routine on Put on a Happy Face.

Veteran T.U.T.S. performer Lalainia Lindbjerg takes herself a little more seriously as Albert’s secretary and sometime girlfriend. Despite playing completely against type she acquits hers admirably when it matters; especially in the second act when she questions her own judgement in the song What did I Ever See in Him and showed off sublime vaudevillian shtick with Spanish Rose. Bonnie Panych is hilarious as Albert’s insufferable mother Mae, who pulls off politically incorrect wisecracks about Rosie's Hispanic heritage with poetic delivery.

The songs that dole out the most fun are Kids! (I don't know what's wrong with these kids today) that shows that parents in the sixties understood their kids no better than parents today and Telephone Hour that would make for a great television commercial for BellTM.

Kevin McAllister’s colourful, economic set, only allows the performers lateral and vertical movements and will likely endure some wear and tear before the show wraps up in mid August. The orchestra, led by Kevin Michael Cripps manages to make these hokey tunes sound fresh and smart.

If you have never seen Bye Bye Birdie before, why not take a chance and go see it? It might even become one of your favourite musicals.