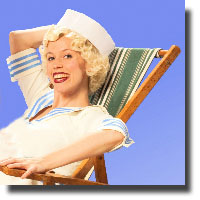 Theatre under the Stars
Anything Goes

Despite the spitting rain, this Cole Porter musical classic was delivered with panache by Jessie awardee Director Sarah Rodgers and Choreographer Dayna Tekatch. Music Director Christopher King got the singers singing those songs that until today are hits. Songs popularized by the greats, the Voice himself, Sinatra: "I Get a Kick Out of You", "Easy to Love". Irene Karas was fabulous as Reno Sweeney singing most of the hits in this musical, and Todd Talbot as Billy Crocker, was fabulous.

This has been my favourite musical mostly because I played the Captain during Summer Stock in Youngstown, Ohio in the early seventies, and all the songs bring back memories to me. The story goes: The SS American, sailing from New York to England, carries an unusual group of passengers, including a gangster (Andrew Cownden), his girl friend (Jacqueline Breakwell), a wealthy debutante (Lauren Bowler), her fiance (Seth Little), her mother (Suzanne Doerksen), a nightclub singer (Irene Karas) and a wealthy New York businessman (Dave Campbell) and his stowaway assistant (Todd Talbot).

I don't have enough adjectives to describe how fantastic and enjoyable this production was. Using Porter's own lyrics, it was "delicious, delectable, de-lovely". The audience was clapping away, swinging with the dancers, shouting wows after each song and dance number. I was impressed by the precision of the choreography. Good job, Dayna!

This is Cole Porter at his very finest and funniest. Musical greats like Ethel Merman have played Reno Sweeney who has delighted audiences through the years with the stylish and classical "You’re the Top", "It’s De-Lovely", and "Friendship", and naturally, "Anything Goes".

You don't have to worry if it rains. You'll be provided with plastic ponchos complements of Industrial Alliance Financial and Insurance Services. You'll also get a chance to win prizes if you have your picture taken wearing a sailor's uniform.