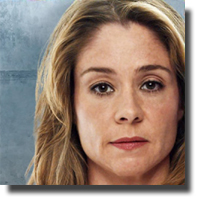 The Canadian Premiere of THIS got plenty of positive buzz even before the show opened that couldn’t have been altogether unforeseen. The prime reason, of course, is the inclusion of Megan Follows in the central role of Jane. It was Ms Follows that stole our hearts as the carrot-topped waif, Anne Shirley in the television adaptation of Lucy Maude Montgomery’s classic novel, Anne of Green Gables. Now forty-two and in mid-career, she has developed into the all-round actor that we all expected she would. The pre-opening buzz was helped along by the homecoming (of sorts) of playwright Melissa James Gibson, roughly the same age as Follows, who grew up in North Vancouver and incidentally, is the daughter of former B.C. Liberal Party leader, Gordon Gibson.

THIS, directed by Amiel Gladstone with original music by Peter Eldridge, straddles a narrow divide between comedy and drama. Cataclysmic issues, like the premature death of a spouse and the betrayal of a best friend are treated with humour. Adversely, moments of joy, like friends taking part in an innocent parlour game suddenly go awry and turn into a minor disaster.

Gibson’s play with its overly simple title is a single act ensemble piece that follows four educated and artistic, thirty-something New Yorkers who have each reached a crossroads in their lives. Jane is a recent widow with a 9-year-old daughter; Tom and Marrell (Todd Thomson and Karen Holness) are a bi-racial couple and new to the demands of parenthood and going through a difficult time in their marriage. The other member of the foursome, Alan (Dmiry Chepovetsky) is a quirky, gay Jew who possesses the gift of Hyperthymestic Syndrome (actually, it’s as much a curse as a gift) that allows him to recall with absolute detail events and conversations from his personal past.

Outside of this group dynamic is Jean-Pierre (Fabrice Grover), a single French national and a member of Médecins sans Frontières (Doctors without Borders). Jean-Pierre is invited to a get-together by Marrell as a potential partner for Jane. The character initially seems superfluous, particularly after a ludricrous French telephone conversation that adds nothing to the storyline, but the role is pivotal in putting into perspective the difference between THIS situation of his introspective new chums and the global issues he must come to terms with in the humanitarian aid organization.

Megan Follows and Karen Holness turn in solid performances, especially when playing off each other. Ms. Follows in particular shows her star quality in the play’s most poignant scene at the end in which her character, who has at last managed to shed the affliction of grief, declares to her sleeping daughter that she is “finally back.” But it’s Chepovetsky as the acerbic Alan with his lack of self-esteem contention who is the scene-sealer. His ‘gift’ of autobiographical memory provides an amusing mechanism for cutting through the slanted interpretations in arguments between Tom and Marrell.

Alison Green’s crowded two-tier set of Tom and Marrell’s loft apartment in the midway throes of renovation, doubles as the lounge bar where Marrell works as a jazz musician. Jane’s apartment awkwardly mounted on the upper level seems almost an afterthought.

The group’s parlour game may well work as a metaphor for life itself. As Jane purports in the opening scene "You make the rules sound simple, which means they're not" - rules are usually only simple to those who get to make them up.