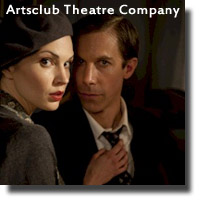 In association with Electric Company Theatre
Tear the Curtain! by Jonathon Young and Kevin Kerr

Tear the Curtain! the eagerly awaited co-production between the Arts Club Theatre and the Electric Company Theatre has finally arrived at the Stanley Industrial Alliance Stage. It was originally planned to be part of the Cultural Olympiad early this year, but the tragic death of Azra Young (Jonathon Young’s daughter) caused its postponement until now.

The joint project is a bold attempt to marry two art forms that haven’t always been mutually compatible. Using film footage to embellish a stage production may not be entirely unique (the Artsclub themselves tried it with limited effect in their 2003 mounting of Singin’ in the Rain), but the Electrics, the obvious creative force here, have taken the hybrid of cinema and stage to a new zenith.

There are instances where action on the screen and action ‘on the boards’ collide – a potential nightmare for the stage manager who must coordinate seamless integration between the actors and the amazing technical elements.

The story is complex and over constructed and isn’t always best facilitated by elaborate technology. The technology, though brilliantly conceived and stylishly executed tends to overtake the story. One can’t avoid sensing that aspects of the storyline were incorporated primarily to serve the technology. Fair enough – people go to the theatre to be entertained, and Tear is certainly entertaining.

Quality behind the scenes can be meaningless without believable performances by the actors. Laura Mennell and Jonathon Young are top drawer on stage and look superb on screen as central characters, mercurial actress Mila Brook, and jaded theatre critic Alex Braithwaite. Dawn Petten, seen earlier this summer in Herr Beckmann’s People, does all that one could ask as Braithwaite’s steadfast secretary Mavis as well as bringing some much needed levity. Gerard Plunkett turns in a typical larger-than-life performance as nefarious impresario Patrick Dugan, who gets an opportunity to revert to his authentic Irish accent; and a disquieting quicksilver portrayal of the mysterious Stanley Lee by James Fagan Tait, who is often seen directing. The Stanley Theatre itself has a pivotal role as the fought-over entertainment facility.

Briefly, the story is set in Vancouver around 1930. At its core, Alex Braithwaite seeing an end to his job as a theatre critic, searches with help from his assistant Mavis for a feature that will re-define his career. This quest propels him towards an obsession for the alluring Mila Brook, an ambitious actress and a charter member of an activist underground group known as the Empty Space Society, and also puts him in the middle of two warring mob bosses who want to gain ownership of the theatre as an illicit front. As if that weren’t enough, he finds himself in over his head when he forms a profane alliance with the phantasmal figure of Stanley Lee, an avant-garde actor who was purported to have died twenty years earlier. As he enters into a state of surrealism, he is pushed to the precipice of his own sanity.

Nancy Bryant’s clothing is spectacular and accurately characteristic of the early thirties. Stage managers are generally unsung heroes, but Jan Hodgson and Jennifer Swan surely deserve high praise for ensuring such an extravagant and adventurous undertaking worked with the precision of a Swiss watch.

Leaving the ‘Stanley’ at the end of Tear the Curtain! I looked up and down Granville Street, not quite sure of what I’d seen, but nonetheless, wanting to see it all again.