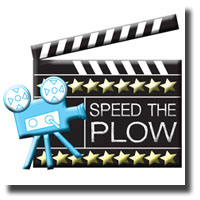 Judging by the frequency of which his plays are presented in this town, it would appear that Vancouver loves David Mamet. Last summer we saw stellar mountings of A Life in the Theatre and Glengarry Glen Ross hit the boards, now it’s seems to be the right time for Speed the Plow (or plough, outside U.S.). The oddly titled, three-handed play is typical of the Mamet brand of satire, which on this occasion targets the American film industry – a business he would know very well.

Bobby Gould (Aaron Nelkin) and Charlie Fox (Eric Epstein) are a couple of flagitious Hollywood executives who are proud to refer to themselves as whores. They’re all set to pitch “box-office gold” to Gould’s chief when an unexpected hitch gets in the way. As newly-appointed production head, Gould has authority to “green light” a movie project of his own choosing. Unfortunately he has scant knowledge of the artistic milieu of film-making.

Gould asks his attractive temporary secretary, Karen (Jessica Hickman), to read an apocalyptic novel on his behalf and summarize the story at his home later that evening. The book, entitled The Bridge: Historical Effects of Radiation authored by an "Eastern cissy writer" is an absolute downer about the daunting prospect of human survival. Gould has no intention of developing the story beyond a perfunctory “courtesy read” but has carnal designs on the fetching temp. Karen, an outsider to the movie business, also has ulterior motives and is aware of her boss’s ardour. She believes that if she can successfully promote the novel, it will open up new horizons.

When Bobby finds himself persuaded by Karen's faith (and bedroom charms), it leaves him with quite a conundrum. Is the project worth risking his career for and how does he blow-off his old colleague?

All three actors deserve equal credit for the production’s on-stage success – I even enjoyed their animated schtick as scene-shifters. Jessica Hickman as the winsome Karen has the least to do, but her transformation from hireling to hustler is essential to the story. Eric Epstein as the ingratiating Charlie is a caricature of the archetypal Hollywood hack. He keeps asking for coffee, but caroms around the office like he’s already had too much. He would probably look less of a putz if his oversize suits fitted him better. Nonetheless, is second act philippic that attempts to bring his partner back onside and take control of the situation is brilliant. Aaron Nelkin is excellent as the executive stereotype who talks a lot but says nothing.

Director Sarah Rodgers keeps this pot-boiler bubbling all the way up to final scene explosion of confused emotion and wrath.

What happens to Bobby? Well, how about this partnership of Whitehorse Theatre Ensemble and Presentation House bringing us David Mamet’s sequel Bobby Gould in Hell next season?