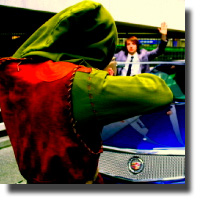 ITSAZOO’s modern-day interpretation of Robin Hood is nothing short of delightful. Admittedly “overtly satirical,” this adaptation, written by Sebestian Archibald and directed by Chelsea Haberlin, demonstrates how this classic tale still all-too relevant in today’s times.

The audience is led around the Bloedel Conservatory, in Pied-Piper like fashion by Alan (Joel Stephanson) as he sings the way from scene to scene. Using contemporary musical classics, social justice is an obvious theme in the mobile soundtrack.

Although presented in a comical manner, the play does not shy away from confronting public policies around homelessness and poverty, and how these problems are often inadequately handled. ITSAZOO gently, but forcefully, reminds the audience that these problems still loom large in Vancouver.

Good and bad guys alike play different roles to showcase how “International Big Deals” can hurt social programs: while prominence on the international stage may be important, it should not come at the cost of funding cuts to education, the arts, health care, or social welfare.

ITSAZOO’s production of Robin Hood will re-open your eyes to problems that surround you everyday and that still have no long-term viable solution.