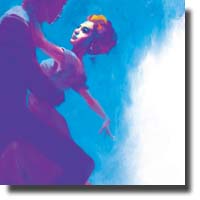 EXIT22
Ring Round the Moon by Jean Anouilh

Ring Round the Moon, as described in director Bill Murdoch programme notes is a “Charade with music” and lends itself to the theatrical form of commedia dell' arte. Although originally conceived as Invitation au Château by French playwright Jean Anouilh, it’s Christopher Fry's adaptation that has become popular in the English-speaking world.

This EXIT22 production moves the action from its original early 20th century setting to the 1950s which allows for a more cosmopolitan mounting, providing an opportunity for students in the Capilano University theatre arts programme to showcase their talents.

The story begins as Madame Desmortes (Tiffany Anderson) plans an elegant party in honour of the engagement of her nephew Frederic (Ryan Bolton) to Diana Messerschmann (Alyssa Kostello), a beautiful, but self-indulgent daughter of a fabulously wealthy businessman. The event then serves as a backdrop for a complex and ultimately confusing plan by Frederic’s “evil twin” brother Hugo (also played by Ryan Bolton), that will hopefully break the spell that Diana has over Frederic – though Diana herself prefers the incorrigible Hugo.

The scheme involves inviting Isabelle (Tracy Varju), a beautiful professional artist, though certainly no aristocrat, to pose as another guest and cause Frederic to fall in love with her thus rejecting Diana. The subterfuge gets de-railed when Isabelle’s mother and Madame Desmortes’ companion Capulet (Nicole Saugstad) rekindle a friendship from their youth. Neither woman has the ability to keep a secret, so Hugo is then forced to improvise his doomed scheme.

Ryan Bolton has the most to do in the roles of identical twin brothers giving each of them separate nuances appropriate to their very different personalities. Not far behind is Tiffany Anderson portraying the wheelchair bound Madame Desmortes; the acid - tongued dowager supplies most of the play's aphorisms in pursuit of an eventual noble goal.

Among the minor roles, Florence Reiher, whom we don’t get to see nearly enough of, is delightfully camp as the audacious Lady Dorothy India and Jessica Gentile is intentionally irritating as Isabelle’s obtrusive mother. Worthy of special mention, is Simone Belshaw who crosses gender and generation gaps in the role of aging butler Joshua, bringing just the right measure of civility and scorn to her character.

Mat Herrmann’s stylish bi-level set is evocative of an open conservatory popular in French provincial Châteaux with upper stage glass doors that (appear to) provide access to the grounds. The empty front stage allows for the frequent entrances and exits from the sides.

Barbara Gregusova’s clothing is accurately characteristic of mid-twentieth century. In particular, the evening gowns worn by the women are elegant in design and creation. (Special costuming was made by students of the university’s Costuming for the Stage and Screen Program).

Director Murdoch never allows the pacing to lag behind the enthusiasm of the performers. Ring Round the Moon is a fitting finale for the teacher/director. He inspires disciplined performances from the actors in the major roles while allowing interpretative latitude in the minor roles.