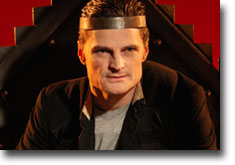 What brilliant acting! From the villainous Richard III (Bob Frazier) down to the citizens, priests, henchmen (Members of the Company), this production deserved the prolonged standing ovation during curtain call on opening night. The audience didn't stop applauding until Frazier came out for his second curtain call amidst bravos for his portrayal of this Machiavellian anti-hero.

This is perhaps one of the best productions delivered by Bard on the Beach. Accolades to Multi-awarded Director Kathryn Shaw for an outstanding mise-en-scene. Marvelous acting especially from Scott Bellis, Joel Wirkkunen, Nicola Lipman, Craig Erickson, Jillian Fargey, Mike Stack, Benjamin Elliott, Gerry Mackay, Linda Quibell, Melissa Dionisio, Allan Morgan and Kyle Rideout. Many of these actors played multiple roles in this production. They all acted as though this were a modern play, which, despite the English of yore, the soliloquies and dialogues were delivered so naturally that everyone understood what was being said. There were moments when you could hear a pin drop as the actors dialogued, or soliloquized. Damned good acting indeed.

Set designer Pam Johnson did an extraordinary job on the thrust stage with her backdrop of corrugated metal and concrete, reminiscent of the Quonset huts of WWII. The use of the lift at centerstage to depict different sets -- a table, or a tomb, was quie creative. Costumes by Sheila White were interestingly eclectic, getting her inspiration from medieval times to the present. Lights by Adrian Muir were exquisite, and sound design by composer Owen Belton was medieval yet with a modern touch. The fight scenes were well coordinated byNicholas Harrison, especially the finale between Richard and Richmond.Choreography by Treena Stubel was simply flowing, particularly the movements of Frazier whose crutches enabled him to move, dance-like, as though he had four legs.

This is a show not to be missed, and I'm almost certain that this play will get full houses in the performances to come.