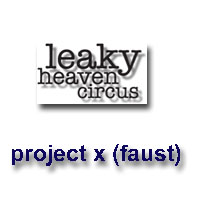 Leaky Heaven Circus has established a reputation for presenting quirky, avant-garde theatre that have intrigued, bewildered and occasionally mystified their audiences. After seeing their latest production project x (faust), I’m happy to report that their reputation is intact.

While its title gives little away, the idiosyncratic theatre company deliberately poaches from Roman Polanski’s Rosemary’s Baby for its dramatic arc. However, project x (faust) is essentially a theatrical synthesis rather than a stage adaptation. I might very well be one of the few people on the planet who has never seen Polanski’s 1968 film, but it clearly belongs in the suspense-horror genre where one of the protagonists is tempted into a Faustian “pact with the devil.” Ironically, the movie was filmed on location at The Dakota building, in New York City where John Lennon was murdered in 1980.

Almost the entire show has to be viewed with the audience sitting on the floor with their backs to the set observing the action by looking into a line of eight, 5-foot high mirrors. The device is obviously intended to provide the audience with the experience of watching a film inside a play.

It’s James Long who we meet first in an amusing introduction where he rolls a few squares of toilet tissue in a single cylinder and places it behind his upper lip to demonstrate various expressions.

All the performers work hard to make this campy amalgam a success, but the show also relies heavily on Anna Gukov and Mirona Motoc’s basic sets of standard apartment furniture set up on 20-inch high platforms that suddenly provide cinematic dazzle when backlit through a sheer schrim.

Unfortunately, I found David Mesiha's soundtrack obtrusive. Perhaps it was my fault that where I chose to sit was barely two metres away from the main speaker belting out a mix of original music and Sinatra standards that at times obscured the actors’ dialogue.

The sixty-minute show, only runs at the Russian Hall until Sunday (24 July). If you decide to go you likely won’t be disappointed, but take your own cushion.