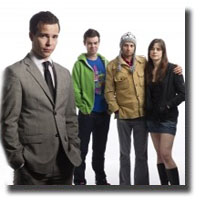 Prodigals, Sean Minogue’s first ever play, set in a winter in roughly present time revolves around a group of chums who have known one another since high school in a small north-west Ontario town (the playwright uses his former home, Sault Ste. Marie, but the story could take place anywhere). They frequently get together for a beer at Fratesi’s neighbourhood sports bar. It’s the kind of bar that could be found in any corner of Canada that might have television sets at all viewing points broadcasting a live hockey game – only this bar doesn’t have any TV.

They seem to have “loser” written all over them. Unemployed Greg (Jameson Parker) wears an imaginary “L” on his forehead like a badge of honour. As Greg, Parker gets most of the best lines and his penchant for physical comedy carries the play for the first twenty minutes. Nips (Brandyn Eddy) is stuck in a dead-end job yet seems accepting of his prosaic existence in a small town. The extent of his ambitions is to have his girlfriend Jen (Tara Pratt) move in with him. Their complacent world is turned into turmoil when Jen’s ‘ex’ Wesley (Timothy Johnston) turns up in town for the first time since leaving for a preferred life in Toronto five years earlier. Wesley has returned to the “Soo” to act as a character witness for Benny at his trial. But since he has scant regard for the man who stands accused of beating another man to death, we are free to assume he has the less obvious motive of reconnecting with Jen.

Conventional wisdom would dictate that she should stay with the honest guy who loves her than the jerk who treated her badly and turns up again out of the blue, but love and lust in a small town is more complicated than that.

While Benny is central to the play’s back-story and a useful device for giving the gang common ground, he remains an off-stage character throughout. His sister Nina (Kirsten Kilburn) and her feckless husband Eliot (Aslam Husain) are de facto advocates who want to blame everyone else including the court prosecutor for his predicament.

Kilburn and Husain work well together and are credible as inimical mates even when they aren’t on stage at the same time. Johnston is only partly successful in portraying Wesley as a player attempting to win over Jen. Tara Pratt arguably has the most to do as the compassionate manager of Fratesi’s bar and generally does it well. She and Jameson Parker are the show’s standouts.

Dramaturge and director Peter Boychuk keeps things moving at a sensible pace. So much so, that I didn’t even notice there was no intermission until the last scene. Set designer Jonathan Tsang’s clever arrangement of a realistic single set allows for on-stage action taking place inside and outside the bar.

After this foray, Sean Minogue looks like a natural. I look forward to seeing what he comes up with for his second attempt.