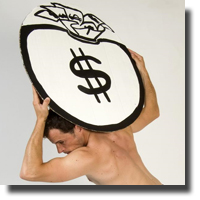 United Players
The Power of Yes by Sir David Hare

Me thinks the author doth protest too much when at the start of the United Players season-opening production of The Power of Yes he insists that this is not a play at all, but rather a story. In fact, it is a disparate series of random vignettes strung together in a haphazard, disjointed and utterly confusing manner. All stories need a villain, and so Allan Greenspan is dutifully trotted out. Yet even a villain requires a motive and we are hard pressed to find one associated with Mr. Allan Greenspan, although it appears from rampant speculation that he is in some pecuniary, or should I say some peculiarly vague way, responsible for the corpulent corpse of the economy that died on September 15, 2008.

Regardless of what kind of summing you do, however, the 'story' here doesn't add up to anything resembling a plot or even a half-decent conspiracy theory, for that matter. It is enjoyable to see veterans like James Gill, John Harris, and Jason Logan waxing eloquent about fiscal concerns like they know what they are talking about, but unless you are a banking maven or an economics student, it is hard not to glaze over after the first five minutes.

Where this postmodern foray into the esoteric boardrooms of high finance loses the audience it sought to gain is, to paraphrase Janis Ian, in debentures of quality and spurious integrity. Maybe Hare's play commits itself to a fractured cause for a purpose. Maybe that purpose is to show us the problem with the economy of a couple of years ago is that the center cannot hold because mere anarchy is loosed on the world. Such would appear to be the standing of the world of this story for those who can last until the intermission.

If you enjoy seemingly unconnected reflections on the causes of economic collapse, you may like to find out about how things like leverage, securitization, free-for-all mortgages, etc. contribute to said collapse. You may even make it beyond the intermission. You may then get to find out whether the myriad mutterings of this so-called story approach enough of a mass to constitute a meaningful plot. I have my doubts.

When it comes right down to it, the acting is the only saving grace of The Power of Yes. That is kind of ironic, considering how it is not even supposed to be a play. However, even the acting is only as strong as the last forgotten line. Not that they are a huge problem in this play, where almost every line may as well... hmmm... there was a point somewhere in this play, if only I could remember it.

My humour, like my patience for this less-than-auspicious season-opener, is admittedly - like the newsprint backdrop Ian Henderson chose for his bare bones set - paper thin. Bold contrast indeed to chin wag with billionaires and bankers in an ambience of such stark austerity. The ingenuity of the metaphor behind this Henderson set has about as much sophistication as his choice to include rampant use of graffiti, neither of which has anything approaching the appropriate kind of gold-bullion, diamond-in-you-face cachet fitting for this play.

You have to hand it to United Players artistic director Andree Karas, though. She is not one to shy away from the controversial. If the season-opener is any indication, this year's plays promise at least to be provocative.