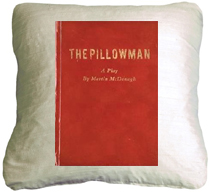 When a narrative works well it is due in no small part to the high degree of control exercised by its author. Ultimate control occurs when said author's stories influence the real world for better or for worse. At the back of all of this is the question of an author's legacy. What will be left behind when he dies? Such issues permeate the dark and somewhat brackish Pillowman. In this Martin McDonagh play, an author named Katurian, who writes macabre stories that go from bleak to grim reaper grim, is being interrogated by a cop and a detective. This all takes place in an unnamed totalitarian dictatorship where children are turning up dead in a manner not unlike that depicted by Katurian in his stories, which makes him and his younger brother Michael primary suspects.

Aaron Hursh portrays Katurian with just the kind of controlled intensity that one assumes a writer might manifest given the circumstances. At first, his responses seem understandable, part of a desperate interlocution. There is a wide-eyed, manic, obligatory compliance. Nobody buys it, least of all Ariel and Tupolski, the brutish cop and the sleuth of a detective. In the capable hands of Mike Wasko and Ashley O'Connell, Ariel and Tupolski take turns laying into Katurian in a clever game of incensed cop, apoplectic cop. As stories are exchanged, character is revealed.

Good storytellers know their audience, and there are several striking examples of excellent story-telling in this play. Oddly enough, though, there is the puzzling line in this play that indicates Katurian wants to tell a story without saying anything at all. Again, nobody's buying. Especially when it is discovered that one of Katurian's most avid readers is his brother Michael. Soon the two Katurian brothers are in a cell together, telling stories and laughing, despite their inhospitable circumstances. There is real chemistry between Ryan Beil and Aaron Hursh. Their comic timing and dramatic intensity are alone enough to make this a compelling play to see. The audience on opening night shared uncomfortable laughter and uneasy tension as these two strong actors brought an almost effortless virtuosity to their roles.

The acting of both pairs of male leads is superb, and the others are capable in their rather limited roles. What lies beneath this is the strong script, with its underlying theme of purposeless narrative. There is a palpable sense that the world is not only 'wild' to borrow a Cat Stevens catchphrase, but also downright cruel and inhumane, and that true freedom might well arise as much, if not more, from escaping through early death as from non-conformity.

McDonagh pitches several macabre stories within this play with an underhanded spin that actor Aaron Hursh manages to 'toss off' extremely well. There is a Poe-like feel to these stories, but even though they tend to have a more allegorical, fable-like quality to them, they are still largely grotesque. The stories involving the cruelties of his mother and father are enacted behind a transparent floor to ceiling screen, and spots and ambient lighting are used to accentuate the caricatured features of the actors in a manner reminiscent of last year's Poe bio-drama, Nevermore.

To retell the stories of this remarkable play would cast me in the role of spoiler, and you will appreciate them much more if you take the time to see the play. Even the embellishments are extremely vivid.

The musical lead-in to each scene builds in an industrial-noise fashion to a mechanical intensity and then sheers off with a metallic abruptness, in a style vaguely reminiscent of some of the pre-scenes in David Lynch's Lost Highway.

Finally, it would be remiss of me not to issue a warning for those allergic to cigarette smoke, and for those who require a strong language warning. Expletives abound and three cigarettes are smoked during the course of the play. The former is realism writ large, the latter an insensitive indiscretion, given the technology available for smokeless cigarettes.