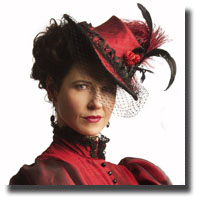 The Philanderer by George Bernard Shaw

Last night (23 March), the Arts Club Theatre Company opened with its 500th production. It has reached this milestone through its willingness to take risks and embrace new methods of bringing to its audiences top quality, well performed theatre. What a pity that it couldn’t have chosen a more venerable work than George Bernard Shaw's social satire The Philanderer to celebrate this landmark.

Set in London in the 1890s, The Philanderer was never even regarded as one of the Irish playwright’s own favourites. It largely panders to Shaw’s own well published views of what he considered to be wrong with the world. However, if Vancouver audiences find the play’s dense dialogue and socio-political excess too taxing, it’s certainly no fault of either the director or the capable cast of performers.

Tom Scholte heads up the cast as Leonard Charteris, the eponymous philanderer at the apex of a sui generis love triangle. He is simultaneously involved with both the needy “womanly woman” Julia Craven (Anna Galvin) and the more manipulative and independent widow, Grace Tranfield (Kerry Sandomirsky), who is smitten, but not wholly infatuated by Charteris’ charm.

Grace prides herself on having “advanced views” (a thoroughly modern woman) with full membership to the exclusive Ibsen Club; a gender-free social club whose rules are guided by pro-feminist Henrik Ibsen. Julia, on the other hand is very much a traditional woman who is in danger of being expelled from that same club for overt feminine behaviour.
Australian born Ms Galvin fittingly plays Julia as an annoying drama queen, the channel for Shaw’s satire presumably targeted towards Britain’s backlash viewpoint on social reform. By extension, Ms Sandomirsky plays Grace with keen self assertion, who always seems to have the intellectual upper-hand on her rival.

The prize for the most laugh-inducing moment would have to go to David Marr in the role of Colonel Daniel Craven Sylvia and Julia's father) who exhibits more indignation than relief when told he had been misdiagnosed over a fatal liver ailment.

Rachel Ditor maintains lively and entertaining direction in a faithful adaptation of the play that is conceivably not easy to stage. Alison Green’s meticulous sets and Philip Clarkson extravagant clothing not only evoke time and place in late nineteenth century England, but demonstrates how the Arts Club have managed to reach a quality plateau without losing its theatrical soul.