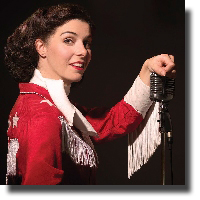 Long before we had country crossover artists Taylor Swift and Carrie Underwood there was the inimitable Patsy Cline. She was born Virginia Patterson Hensley on September 8, 1932, in Winchester, Virginia; the first woman in country music to perform at New York’s Carnegie Hall and to have number one records in both pop and country charts. When she married Gerald Cline in 1953, she assumed her married name as her professional name together with Patsy, presumably a derivative of her middle name, Patterson

Dean Regan’s A Closer Walk with Patsy Cline is twenty percent musical theatre and eighty percent tribute concert. In fact, what little back story there is centres around a musical tribute radio show presented by DJ Little Big Man at WINC-AM on the same day as the singer’s death.

The remarkably versatile Sara-Jeanne Hosie thankfully doesn’t attempt to mimic Cline’s voice. She offers more of a characterization than an impersonation, more of a portrayal than a portrait. Nobody could sing a hurtin’ song like Patsy Cline, but Hosie comes pretty close. Among the show’s eclectic song list, starting appropriately with Come on in and ending with the Willie Nelson penned Crazy, are some hidden gems as well as the usual fan favourites.

Kevin K. James provides capable support as a subordinate narrator and the story’s framing device. His stand-up comic shtick is mildly entertaining, but I would have preferred more focus on the subject’s life. I found it odd that in deference to the show’s theatrical element, Alan Medcalf was introduced as Grand Ole Opry guitarist Spider Wilson, yet never really gets an opportunity to do anything other than perform as a side musician. Nonetheless, the five-piece band led by Nico Rhodes, on stage for the entire 90-minute show was note perfect.

Ted Robert’s functional set of a wood-panelled bandstand and the disc jockey's radio booth at stage left is adaptable enough for such diverse venues as the Lone Star Saloon, Papa Mojo’s Roadhouse and the Opry, but hardly Carnegie Hall. Norma Bowen must have blown almost the entire production budget on Sara-Jeanne Hosie’s eight costume changes, from the nostalgically charming cowgirl outfits to the elegant vegas style dresses.

If you don’t already own any of Patsy Cline’s recordings, this show could just make you rush home and download some her best songs (legally, of course).