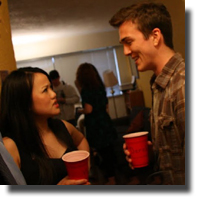 In Party this Weekend, the fourth wall comes tumbling down as the audience joins the artists as guests at a house party. In this site-specific theatre event, the guests are split up in to four groups, with each group following a different character, and a different storyline. The effect is unlike anything I’ve experienced. As you follow your character you will see the party from their eyes, only catching a glimpse of the antics and intrigue going on with the others as they cross paths throughout the evening.
The four main characters comprise type-A hostess Lara (Laura Hope), smooth talking Cameron (Andrew Baker), life of the party Vivian (Maggie Ma), and reticent Derek (Matt Beairsto).

I followed Derek; and what an evening he had! We were introduced to him by his girlfriend, Mary (Katie Copeland), as he himself did not seem too comfortable with getting to know us. We learned that he plays guitar, though not for an audience, and that he would rather be watching TV than be at this party. As the night progresses we follow the ups and downs of his relationship with Mary, which involve more than one surprising revelation. His story is at times funny, at times sad, but always intriguing, and Beairsto plays the part with ease and great believability.

While I did not have the chance to follow the other three characters, I did catch bits and pieces of their story. I hear that Vivian spent the night making friends and realizations of her own, while Cameron played a role in a few mysteries, and Lara flew around in a stressed frenzy trying to ensure that her best friend’s party would be perfect.

Aside from these main characters there were also friends, family and co-workers present, who each bring their own flavour to the party. There are too many to name, but one who is hard to miss is the party loving Fish; he’s the guy who seems to show up everywhere with a drink in hand and something to say.

What I loved about this play was that while there were times when I was very aware that I was a observer, as I don’t usually follow someone around all night and intrude on their most private moments, there were other times when I really felt like I was just a guest at a friend’s shindig. The loud music, the drinking games and dance party - even the girl crying in the front yard - are all things that one could easily witness at any party, and I applaud the cast and crew for being able to capture this particular atmosphere so succinctly.

Though the show is scripted, each night is completely different depending on the largest variable of all; the audience. Some audiences are more observant while others want to get involved; either way the cast has to make it work and follow their cues, while maintaining the illusion of the party.

After the play there is an open invitation for all to join the actors at a local pub to break down that wall even further; it’s a chance to exchange stories and to get to know everyone a little bit better.

Check out the character blogs online to choose who you want to follow, or come out multiple times for the full experience. Either way, you’re in for a unique experience which blurs the lines between acting and reality; bringing to mind Shakespeare’s famous notion that all the world’s a stage, and us merely players in it.