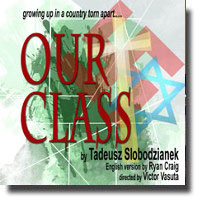 
When one thinks about the Holocaust, one brings to mind concentration camps, marching Nazi soldiers, and Jewish people hiding from the Gestapo. When we think about the “enemy” we prefer to envision a faceless stranger marching into town and taking out his aggression on innocent strangers. But what if the so-called “enemy” you are in danger from are the people you have been living with your entire life and calling your closest friends and neighbours?

Our Class is not your typical story about the Holocaust. For one thing, it takes place in a small town in Poland, and outlines the problems the Soviets, Poles, and Jews had long before Nazi soldiers came to town. In fact, the role the Germans play in this production is minimal - instead, we see how anti-Semitism and mistrust paved the way for WWII.

The story begins in 1925, when our 10 cast members are just starting school together. They introduce themselves to each other and tell their classmates about their families and their ambitions. One student wants to be a farmer, another a film star. It is fascinating to see the characters as “blank slates” who will eventually turn on each other in the name of patriotism and loyalty. At first, I thought it odd that the cast members, who were all supposed to be the same age, actually had an age range spanning several decades. I soon grew to appreciate this fact though, as I saw the young cast members of the past haunting their living classmates decades later.

Our Class is directed by Victor Vasuta, who interviewed Holocaust survivors to prepare for this production. I don’t want to pinpoint which characters turned “bad” and which ones stayed “good” because I think it is best for audience members to go in with no preconceived notions of good and bad and no favoritism. No one can judge the choices the characters make until they see the circumstances that bring them to that point. Let me say though that all 10 cast members brought an exceptional amount of life and emotion to their roles - an amount of dedication and emotion that no doubt affected the actors themselves outside of their roles.

Perhaps the strongest performance came from one of the younger cast members, Kayla Lynn Lewis, who gave a heartbreaking portrayal of a sassy young girl who eventually grows into a brave young mother terrified for her own child’s life. One of the most interesting characters was Abram, played by Douglas Abel, who moves to America shortly before the war breaks out and thus acts as an “objective” outsider who is not as impacted by life in Poland as his classmates who remained there.

The staging was simple yet effective, and the lighting and sound effects and live songs added to the drama.

Our Class is worth seeing, especially for the opportunity to challenge your preconceived notions of right and wrong. Director Victor Vasuta says “This is also a story about the magnitude of the long-term consequences (that the choices we make) have for the whole of humankind, in fact helping to define who we are today.”

Set in Poland, during the Soviet and subsequent Nazi occupations, the 10 actors in Our Class take you on an emotionally wrenching journey through their characters shattered lives.

At first, life was simple and enjoyable; the children playfully engaged each other in simple games and joined one another in raucous song. However, even then, the seeds of discord were evident. Then one of the children, Abram, was suddenly whisked away to America, where he spent the remainder of the show.

As the children grew, tension between their respective faiths effectively drove a wedge between them. Neither side, Christian nor Jew, was able to claim absolution in the matter. Each side took turns oppressing the other in one way or another, alternating between occupying regimes.

As the show progressed, hatred and intolerance danced together hand in hand - culminating in a horrific crescendo of violence. The rest of the play detailed the aftermath; how each surviving character dealt with his or her role in everything that had happened.

Throughout the first half, I found myself quite unsettled by the graphic detail and imagery that was evoked. I found myself wondering just how seemingly good people could do such terrible things to people they once considered friends.

Two characters heighten our perception of the disparity…and the insanity… that beset those left behind in Poland. One, Abram, is a constant source of objective questioning, as he seeks to understand the how and why behind it all. The other, Wladek, is the only one of the Polish Christians that appears to maintain a conscience, and for the most part, serves as the conscience of the play until the very end.

The characters are interwoven in an engaging fashion, allowing each actor to shine in powerfully scripted scenes. The emotional strain on them, and the audience, is obvious. Throughout the production, people around me we reacted to the unfolding drama before them, flinching at sudden noises, gasping or turning away from at the horror that was never too far beneath the surface…or laughing during the few moments of unexpected mirth.

Those moments were precious.