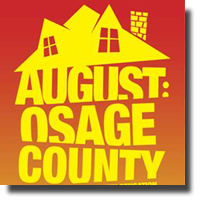 If you cannot beat the odds, you might at least be able to beat the adages. Still, some find both insurmountable. In the aftershock of August: Osage County, my mind wanders to the old saw about how it is better to have loved and lost than never to have loved at all. Throughout all the commotional wreckage careening about the stage in search of love and other strangers, this adage winds itself in an ironic stranglehold around several members of the Weston family.

What little adagio there is in this admirable quagmire of a tragicomedy rolls over the audience in the first scene, wherein Sean Allan does his best hollow man portrayal as the patriarch, Beverly Weston. Maybe it's the company, maybe it's the liquor, maybe it's knowing his 'shrinking' Violet is only a footfall away. Regardless, Allan's laconic Beverly Weston lets on much more than he appears to know, and sets the stage, through his revealing contrast, for the whirlwinds that ensue upon the occasion of his subsequent disappearance.

A perfect storm ensues. In the wake of Beverly's vanished boat, much grist for the millstone around his neck appears to create chaos out of the glazy-eyed calm that sat at the centre of his hurricane. If he seems shaken, his understated performance is sure to stir you. He proves to be a striking foil for his turbulent bride.

When a character like Beverly drops out of play so early, one must have a reason. Several reasons come to mind soon enough. And they all spell Violet. Nora McLellan is louder than life writ large. She invests Violet Weston with an edgy bombastic voice that is pitched with precision, even as it appears to totter out of control. It is easy to imagine most of us shuddering at least a little inside at the uncanny resemblance Ms. McLellan gets her character to hold to that certain ineffable crotchety aunt we are all loath to love.

Not that there is a lot that is ineffable about the language Violet uses when she bars no holds with her three 'darling' daughters or her granddaughter, mind you.

Oh yes, it gets graphic and it gets visceral. But always throughout there is the seam of golden humour that is woven into the warped woof of this worldly-wise tapestry.

Middle daughter, Ivy Weston, played with sensitivity and insight by Wendy Noel, tells her sisters that families are a randomly combined collection of genes. Whether you see a family as a carefully structured fabric or as Ivy Weston sees it, the irony of her remark makes for compelling contemplation as events unfold, and secrets are revealed.

There are too many convincing performances for me to cover in this short a review. Each actor deserves high praise.

Sufficient unto the play is the talent thereof. And there is more than sufficient talent here.

August: Osage County is compressed steam, escaping where it can, until it cannot but whimper.

Tracy Letts proves that it is not better to have loved and lost than to have never loved at all, because evidently some people's version of love involves an unholy alliance of all three states. This is one of those plays that is a delight to watch when well-acted, and a rich repast to read when well-considered.