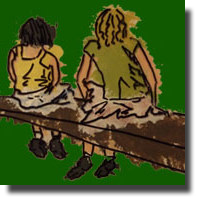 Marion Bridge by Nova Scotian playwright Daniel MacIvor is the inaugural presentation of the optimistically named Theatre of Infinity. It’s a family drama that evokes the tensions of an enforced family reunion as three sisters confront their painful pasts.

The sisters could not be more disparate in terms of personality, temperament and choice of comfort beverage. Agnes (Terri Anne Taylor) is the rebel; not quite an alcoholic, but certainly too inclined to medicate with whiskey. Theresa (Jeanie Kawakami Cloutier) has taken final vows as a nun who prides herself on being the peacemaker and prefers the calming effect of tea. Louise (Rebecca Husain), the youngest, is the lovable misfit who is addicted to watching soap operas while constantly sipping on a can of pop.

Set in Cape Breton, Nova Scotia in roughly present time, the play opens with a monologue directed to the audience by Agnes, a less than successful actress home from Toronto to be with her mother in what will be the last few days of her life. Enter Theresa home from Friday evening Mass. There is a tangible stiffness between the two as Agnes shows reluctance to go up to see their mother despite Theresa’s insistence.

Louise is the last of the three to appear on stage. Unlike her older and seemingly much wiser sisters, she has never left Cape Breton and is uncomfortable with the “invasion” of the other two. She still harbours a lot of resentment towards her family for past alienation.

After the mother (whom we never see) dies while the sisters are away from the house visiting their estranged father, the hostility among the trio gradually dissolves and they begin to lean on each other for support. Agnes surreptitiously tracks down the daughter (Joanie) whom she was forced to give up for adoption. Louise’s vision about going on a road trip without knowing where it will take her (revealed in a poignant second act monologue by Ms. Husain) is closer to being realised when she buys a truck with her share of the insurance payout.

Marion Bridge is a tender story of small victories and personal heartaches that is at times sentimental, but never maudlin.