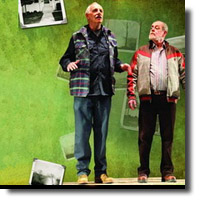 Immediately engaging, the first act of the play introduced nearly all of the characters and moved between house, to mountaintop, to work, and through an even broader spectrum of emotions. Filled with wry humour, rarely a second went by where the audience was not laughing.

Set in rural Quebec, Une maison face au nord is a kind of adult coming-of-age story, or perhaps more aptly, a coming to terms story. The progression and character development reminded me of the many classic literary bildungsroman stories.

Ostensibly about growing old, Henri and his wife Anne-Marie, demonstrate the challenges of growing old together once children have left the household. Alienated by time and space, Henri is disconnected from his family and struggles with the changes of modern Quebec society, where even a small rural town has dramatically changed over the course of a lifetime. In the many kitchen scenes, Henri and Anne-Marie share tenderness, despite frequent arguments that could easily pigeon-hole them as a stereotypical, quarrelsome old married couple.

The first act was nearly twice as long as the much more serious second act, where Henri has passed and Anne-Marie comes to terms with his death, and also realizes the great differences between her generation and that of her son. Characters like Larry (played brilliantly by AJ Henderson) and Henriquez, a Guatemalan immigrant who works for Henri (played by Alexandre Dubois) help bridge the gap between generations.

Despite not having a full understanding of French, I thoroughly enjoyed the play. It was strongly emotive and even when I missed the nuances, I still could understand what was happening. The audience was in laughter for most of the first act, and sombre during the second – as the play demands. This play was very well performed and I believe that when an English version is produced, it will also be very successful. Its themes and characters give this play incredible universality despite its setting, and even its language for those (like me) who are not 100% fluent in French.