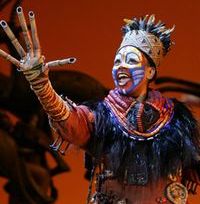 Broadway Across Canada brings again another Tony-award-winning Broadway sensation, this time, a Disney classic musical unique in its visual and technical aspects. An entire Afican savannah comes to life with giraffes strutting, birds swooping, gazelles leaping. Hats off to scenic designer Richard Hudson, costume designer and overall director Julie Taymor, plus the magnificent lighting design of Donald Holder--what ingenuity and creativity for all their efforts!

The actors were also terrific. From Simba, Rafiki, Zazu and Nala, to Scar, Mufasa, Timon and Mumbasa, their energy exuded throughout and was indeed awe-inspiring. This is the first time I've seen an almost all black cast, but rightly so, because these are African characters. What an interesting experience, but most of all, entertaining. After all, that's what Musical Theatre is all about: entertainment.

This was a memorable experience indeed, and the crowds cheered in standing ovation during opening night's curtain call. The ingenuity of the production was something out of the ordinary, a really extraordinary spectacle appealing to the child in all of us. Truly a show for all ages. You hear children laughing, old folks snickering, and the audience relishing this theatrical event.

From the very first minutes, when the characters appear and start coming in from all areas of the theatre, you feel the energy as the drums roll on both sides of the stage and the music from the orchestra pit play "The Circle of Life". And then there's that unforgettable "Can You Feel the Love Tonight" at the end of the second act, the melody lingering in your head hours after the show ends.

This was indeed for me a rare theatre experience, a musical that is humorous, intelligent, full of wonderment, and imaginative. Broadway Across Canada has been bringing top-rated shows to Vancouver these past years, and they rightly so also deserve a standing ovation!