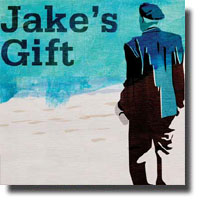 As WWII veterans gradually become fewer, the significance of Remembrance Day on the eleventh day of the eleventh month seems to diminish with each year passing. So, it is perhaps timely that someone would create a piece of theatre that serves as a tribute to our soldiers – past and present.

Julia Mackey’s one-woman show, Jake’s Gift valiantly takes up the cause. It started life back in 2002 as part of a workshop presentation in the same theatre to which it has returned for a ten day run. Since its humble beginning, Mackey has nurtured the project with patience and perseverance, especially with the development of her central character.

While the characters (with one exception) are fictional, the events are generally fact-based, bringing into focus emotions arising from the sixtieth anniversary celebrations of the D-Day landing. Though it contains elements of the 1998 film Saving Private Ryan, it’s as much a story of friendship between a self-assured ten-year-old French girl living in the first house to be liberated and a cantankerous Canadian veteran returning to Normandy for the first time in sixty years.

Jake is the sole survivor of a trio of brothers who were part of a Canadian artillery battalion that invaded Juno Beach in June, 1944. His older brother died in action and lies buried at the Cimetière de Berny-sur-mer. The old warrior is as much a reluctant celebrant as he was a soldier, but feels a solemn duty to attend.

Isabelle, the young French girl is out walking on Juno Beach with her Grandmama, who shares the same name when she first meets Jake. Despite the old man’s initial prickliness, they become fast friends when the youngster shows the curmudgeon the graves of the fallen Canadian soldiers that she tends to. It turns out that one of them is that of Jake’s brother.

The roles of Jake, Isabelle, her Grandmama and Susan, a teacher from Ontario, are all played by Mackey who moves seamlessly between characters giving each of them a distinct voice and finely detailed mannerisms. Although not purposely maudlin, the performer is not embarrassed to tug at the heart-strings, especially in the story’s tear-jerking twist at the end (sorry, no spoilers here).

Notwithstanding the play’s serious theme, Mackey infuses and delivers witty humour – much of it physical - in the way she portrays her principle characters at contrasting ends of lifespan.

Production values are kept appropriately simple. The first thing you notice about set design - is there isn’t one. Chairs are set up temporarily on the stage floor, which means that all seating is south facing – unusual for the Pacific Theatre’s double-sided space.

Julia Mackey’s well crafted, courageously acted challenging blend of comedy and drama about the best and worst effects of war on the human psyche should be seen by anyone who values the sacrifices others have made on our behalf.