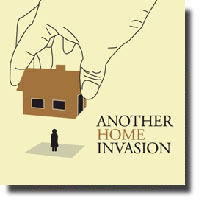 Another Home Invasion by Joan MacLeod

A few years ago, my cousin over in England sent me a local newspaper with instructions to read the story on page 16. It was about a widow in her seventies who had forgotten to lock the door to her apartment and while she sat watching television, she became aware of rumblings coming from the doorway. When she went to investigate, she was confronted by a young lout, sixty years younger, six inches taller and 30 lbs heavier. The old lady gave him a tongue-lashing and sent him on his way. When I saw the woman’s name I realised it was my aunt.

Aunt Hilda was luckier then she might have fathomed at the time, but many seniors who have experienced the unwelcome presence in their home of an intruder haven’t been so fortunate. It happens with such frequency that it initiated the first word of the title to Joan MacLeod’s one-woman, conversational play Another Home Invasion told from the perspective of a mettlesome octogenarian.

Jean (Nicola Lipman) and her husband Alec, who is often mentioned but never seen, are seniors still living in the same North Vancouver house she and her husband bought fifty years ago. They eat dinner at 4.30 and the highlight of Jean’s week is the “Aqua-fit” session at the local wave-pool.

Jean’s joints may be stiff and her bones brittle, but mentally and emotionally she has it all together. Alec alas, is suffering from the early stages of dementia and needs more care and support than his wife, though willing, is able to give. She has her heart set on moving into the Kiwanis retirement residence, but has already been wait-listed for 27 months and the red tape is getting longer. Except for their grand-daughter Amber, whom they pay minimum wages to come over and clean the house, their grown family have everyday problems of their own and don’t offer much help.

The seventy-minute play mostly revolves around Jean talking to the audience about what happened to her when a stranger, whom she refers to as “the fella” and likely an addict, randomly turns up at her house - twice. The first time for the purpose of reconnaissance; the second time to rob the elderly couple of anything he could put in his pocket.

Joan MacLeod wrote the play with Nicola Lipman in mind. The actor’s invitational style and informal dialogue intentionally comes across as spontaneous. However, there was much preparation and concord between writer and artist in the play’s development.

Although on stage for the entire performance, alone with only the aid Scott Reid’s simple set of a single upholstered Wainscot chair and a symbolic walking aid at left stage, Lipman seems to take up the whole room. As Bill Millerd mentioned in the programme notes, the play is a natural fit for this newly renovated theatre space.

If you find yourself on Granville Island with time on your hands, stop by and visit Jean at the Revue Stage – she’ll enjoy the company – and so will you.