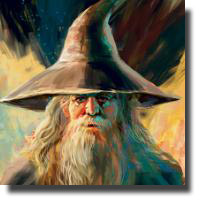 For me, this EXIT22 production of The Hobbit was a very first visit to the hallowed Middle Earth. I never got around to seeing any of Peter Jackson’s film adaptations that form the Lord of the Rings trilogy.

The play, complete with its synthesized, pre-recorded score, is performed on two stages: the main stage that accommodates Drew Facey’s versatile set and a 6’ x 15’ temporary elevated platform that displaces three rows of seating in the auditorium’s centre section. Because the story is set in many surreal locations, it was always going to be difficult to bring such a fantasy epic to life on stage, but Facey’s simple, yet functional wooden construction, helped by projected media, allows the audience to use their imagination to visualize Bilbo’s hobbit hole, the Misty Mountains and Gollum’s perilous dark cave.

To overcome Tolkien’s complex characterizations (that are easier to grasp in print form) and perhaps to compensate for some of the performer’s enunciation, Aikins wisely opts to go with incidental narration provided by the principal protagonist’s grandmother (Chalene Scott). Jay Havens and his team of costumers create carefully detailed and sumptuous clothing that raises the bar for student productions.

About sixty years before Frodo Baggins flung that mysterious ring at Mount Doom, his benevolent uncle Bilbo was pestered by Gandalf the wise wizard attempting to persuade him to join a bunch of dispossessed dwarves led by their King, Thorin Oakenshield on a quest to reclaim the Lonely Mountain and its treasure from Smaug the dragon. The easily flustered Bilbo is understandably reluctant to abandon his quiet, contented life and invest in such a thankless task. Even King Thorin makes it pretty plain that his contribution would be negligible.

However, Gandalf sees something special in the hobbit and convinces him to sign on with the group as the burglar. On the journey, Bilbo encounters other phantasmagorical creatures: treacherous trolls, execrable elves, giant spiders, flagitious goblins and a nefarious stoor hobbit named Gollum. It’s while he’s near Gollum's lair, that he comes across a magic ring that when worn allows him to become invisible; a device that he subsequently uses to rescue the dwarves from the elves' prisons.

Some solid performances from Christopher Fader as the eponymous hero and Sean Bygrave as the petulant Thorin Oakenshield go some way in detracting from the production’shortcomings like the ‘comic-book’ fight choreography. Donia Ghashghai-Pour gives a lot of personality to Gollum with an outrageously rambunctious portrayal of the taunting cave-dweller. It’s too bad we saw so little of her.

Ably assisted by a hard-working young cast of theatre arts students, Stuart Aikins’ has pulled together an ambitious and high-spirited show that, if audiences can bring themselves to forsake their sense of verisimilitude, will surely enjoy. Coincidentally, just as this production ends, the Vancouver Symphony Orchestra perform in concert Howard Shore's Lord of the Rings Symphony.