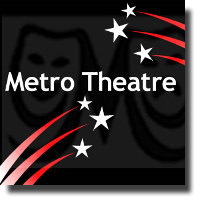 We were seated approximately dead centre in the Metro Theatre on opening night. When the performance started with the mother Veta Louise Simmons played by Susan Cox and Myrtle Mae Simmons her daughter played by Kate Kysow we found it hard to hear them from where we were seated in the theatre. It eventually got a bit better as the play continued. There were other times during the performance where lines were inaudible.

The constant moving of a bouquet of flowers from fireplace to table, to the far wall and back again was quite distracting from the performance. This repetitive gesture gave the impression that the actors were trying to find something to do with their hands.

There were a couple of stumbled lines and the actors seemed nervous for the first hour of the play - all with the exception of Elwood P. Dowd.

Trent Glukler who played Elwood P. Dowd, the brother who had an invisible 6 ft rabbit as a friend gave a fine performance. He appeared relaxed in his role and seemed to know his lines. Susan Cox as the mother did a fine job of hyperventilating with near hysteria over her experience with the psychiatrists.

After the first hour several members of the audience were starting to shift in their seats and we did also since the play was a bit slow. Two and a half hours for this play was far too long, even though there was a 15-minute intermission. The temperature in the theatre was too warm which made the length of the play seem longer.
Hopefully as the play is performed over the next three weeks the actors will be more at ease and I’m sure there will be no stumbling in their lines after a show or two. If the play could move a little faster; the length made a little shorter and the theatre temperature lowered then a great improvement could be had.

All in all, the best performance was the invisible 6 foot rabbit. What do you mean you didn’t know where he was?