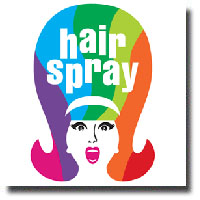 The Arts Club Theatre Company presents Hairspray, the ``big fat musical comedy hit``, which has been reincarnated numerous times worldwide since it was originally brought to life by John Waters in 1988. Director Bill Millerd has pulled out all the stops on this one, bringing in an amazingly talented cast and crew. Diehard fans and first timers alike will not be disappointed by the musical that has captured the hearts of audiences worldwide.

The show opens with Tracy Turnblad, played by Jennie Neumann, welcoming the audience to the musical with Good Morning Baltimore. This beginning wastes no time in drawing us in to the story while introducing a whimsical tone which carries throughout the performance, and introducing us to the backdrop of Baltimore in the 60`s. This is Neumann`s first starring role with the Arts Club, and from the get go she proves to us all why she was chosen.

The following scene brings us to the Corny Collins Show, where not only do we meet the Nicest Kids in Town and their hilarious host Corny, played by Matt Palmer, but we also learn that it is Tracy`s dream to dance on this show. The next few scenes introduce us to the ever-popular but malicious Amber Von Tussel, played by Anna Kuman, the dreamy love of Tracy`s life Link Larken, played by Adam Charles, and the fun-loving singing and dancing Seaweed J. Stubbs, expertly played by J. Cameron Barnett.
No Sooner are Tracy`s dreams of stardom realized then they transform in to something much larger; a stand against racial segregation. As Tracy and her friends are plotting their next steps, the audience is treated to a bevy of wonderful singing and dancing.

In the first act, Barnett`s rendition of Run and Tell That got the crowd going as his ability to sing and dance at an alarming pace (and with such apparent ease!) completely blew the audience away.
The first stand-out song of the second act was Timeless to Me, the endearing and completely comical duet between Edna and Wilbur Turnblad. Edna is played by Andy Toth, who has stepped in for Jay Brazeau in this iconic drag role, while Wilbur is played by local star Laurie Murdoch.

The next hit song, I Know Where I`ve Been, was sung by Alana Hibbert as Motormouth Mabel. It was one of the most beautiful and heartfelt renditions of this song that I have heard and brought the audience to a roaring ovation.

The ending of the musical came with the always enjoyable You Can`t Stop the Beat, which wraps everything up nicely and treats the audience to one more performance of their favourite characters dancing and singing their hearts out.

Hairspray is a never ending parade of energy and sound combined with valuable messages on life and love. The cast are clearly enjoying themselves and put on a fantastic performance. This is musical comedy at its best and I highly recommend it to individuals of all ages and interests.