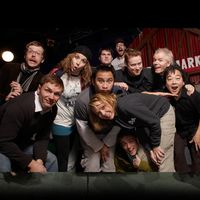 This improv was fun! The whole setup in the theatre was comfortable and cozy. The lighting was warm, the sound was perfect and the stage backdrop of the skyline of the city at night made me feel like a part of the production. It was an almost full house and the staff was attentive and courteous.

The performance started on time unlike some of the recent performances that I have attended elsewhere. It was funny from the moment the GO word came up.  Yes, there were cops, robbers, a good looking blonde, and ridiculous costumes. There is nothing like being taken back in time to the old cop shows of the 70s and how corny some of them seem to us today. Corn or not we still like to reminisce about the good old days.

Do you remember the song themes that went with them? There was Starsky & Hutch and Hawaii Five-0 at a time when cops were called “Fuzz” and big hair was in. Well,  Executive Director Jay Ono, and the cast of Gritty City Fever did a fine job of taking me back. The costumes were great and there is nothing funnier than a guy wearing a pink boa.

Doing improv is difficult and I was impressed by the spontaneity of these actors. There was reference to "the cherry" which, in those days, referred to the removable red police emergency light on top of the cruiser. What made things funnier is when sound and action didn’t quite synchronize. A slap to the face came with its delayed sound effect. Someone got shot and was on the floor before the sound of the gunshot which made it just sooooo funny!

Although this was the 70s, I couldn’t help thinking that one of the main performers reminded me of Johnny Depp. All and all it was a good performance so please take in this fun show. We all need to laugh more.

I would especially like to thank David Heron, Audience Service Manager for the back stage tour.

There are lots of gunshots and slow-motion movements, imitating the movies, and sound technician Laura Skelton does a good job hitting the sound effects at the wrong times. At this improv, the other members of the cast included Jennifer Waner, Taz Vanrassel, Eric Fell, and Jeff Gladstone.

As part of the improv, the actors pick members of the audience to join them. One volunteer was invited to play the mafia boss, Mr. Piranha, and three blondes in the front row came up to do disco dancing.

Although this wasn't one of the better shows I've seen done by VTSL, it was still fun. I probably should have had a drink or two to get my funny bone going, because the other members who had drinks in their hands were laughing when they were not supposed to laugh.