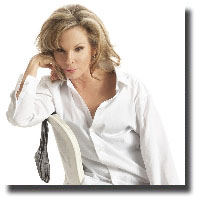 The Graduate
Adapted for the stage by Terry Johnson

The Graduate is a Terry Johnson stage adaptation from Charles Webb's semi autobiographical book. Made into the 1967 film of the same name, it launched Dustin Hoffman as an A-list actor and certainly didn’t harm the film career of Anne Bancroft, who at 36 was only six years older than Hoffman when the film was released. This production simultaneously gains and loses in the conversion from the celluloid original. However, despite rather obvious failings, the play is slick and stylish on many levels, providing humour and satisfying entertainment.

We first meet recent Ivey League graduate Benjamin Braddock (Kayvon Khoshkam), in the bizarre opening scene sitting on his bed, wearing a wetsuit and scuba mask. The diving gear is a graduation gift he is expected to demonstrate to his parents' friends. He ultimately refuses to indulge his father's gratification, but before he leaves the house, he is visited in his bedroom by Mrs. Robinson (Camille Mitchell), the middle-aged trophy wife of his father's business partner. The following seduction scene is disappointingly lame and makes less sense than the film version, which takes place in the Robinson’s empty house, not the Braddock’s full one. Also, when Mitchell opens the towel she is wearing to expose her naked body to a (supposedly) shocked Benjamin; audience members seated at the rear left side of the theatre get to see that she is modestly covered.

Camille Mitchell’s take on the Mrs Robinson character differs from Anne Bancroft's portrayal of the self-assured, elegant seductress. Mitchell shows her as a neglected, frustrated participant in a loveless marriage, medicating herself with martinis. She is sadly drawn to the younger man more out of boredom than a carnal desire for sexual adventure. She pursues what she doesn’t want more readily than what she needs.

Likewise Benjamin, a successful college student (at least in his doting parent’s eyes) has reached a crossroads in life and is indecisive about which direction to take. Khoshkam, aside from looking about the right age, gives a committed complex performance - his anxiety is real, his confusion genuine.

The better part of the well-paced, first act explores the inevitable liaison between the awkward, socially inept Benjamin and the sexually composed older woman. A device that accentuates the age difference between the two, has Benjamin, even after several corporeal encounters, always addressing his co-adulterer as “Mrs. Robinson.” But relationships of convenience don’t last forever. Tension brought about by the age difference begins to show, when Benjamin requires more social interaction, while Mrs Robinson has only physical urges. When he reluctantly agrees to his parent’s demand to meet Elaine (Celine Stubel) the Robinson’s idealistic and naively optimistic daughter, the relationship is further complicated.

Elaine appears to be even less Benjamin's type than her mother does. After initially attempting to push her away, he recklessly stalks her as far as her college campus. Notwithstanding Stubel’s best efforts in a one-dimensional role the pair’s lack of chemistry at times threatens to derail the production.

Director Lois Anderson is at least to some degree successful in translating this film classic to the small stage. Though, the production does rely heavily on Amir Ofek’s versatile set design, with its rolling platforms and rotating sections. The changes in the play’s numerous locations, while not always seamless, are indicative of the show’s overall production quality.

Two features of special interest in this mounting: a cameo role by UBC drama professor Jerry Wasserman, who, as Mr. Robinson manages to balance comedy and anger perfectly, plus local indie band Ivory Sky providing between-the-scenes incidental music with their songs More than we burn and Run free.