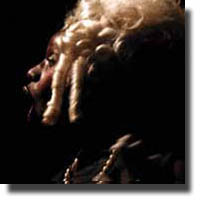 Brown Girl in the Ring

The thing that I’ve always enjoyed about fringe festivals is the surprises. One is never sure of what is going to happen until you’re inside the theatre and you’re seated to far from the exit to make a discreet escape. The occasional minor disappointment is easily compensated by uncovering a theatrical gem. Brown Girl in the Ring is hardly a gem, but it does offer a fair share of surprises. The show’s title is taken from a traditional children's song originating in the West Indies and popularised by Boney M during the short-lived disco craze in the late seventies. Valerie Mason-John uses it as a metaphor in a self-produced, single-handed performance that is part fantasy and part semi-biographical. One might have expected that a play that pitches its main premise as a black woman having a legitimate claim to the British monarchy would have been a non-stop hoot. Certainly Brown Girl does have many comedic moments (some work, some don’t), but the fact is, even when projecting a faux Windsor accent and donned in a loud fuchsia dress and white Colonial style wig, Mason-John is a better narrator than a comedian. Undoubtedly, the show’s best parts are when she leaps through dimensions to relate though a conversation with an imaginary friend Michael, poignant childhood experiences as a foster child with a white family.

She utters “Sweep it under the carpet” like a catch-phrase at least a couple of dozen times throughout the 50-minute show. To most of us, the idiom suggests ignoring the problem at this time, but the performer frequently continues to labour the same point. From someone with as much authorship credentials as Mason-John, I found the writing, particularly the comic writing disappointing. I sensed that this is a work in progress. Perhaps with less emphasis on pro-gay one-liners and more on story-telling there might just be a kernel for a full-blown professional show here. 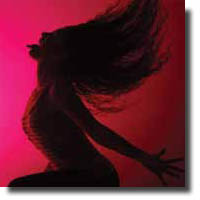 Gemma Wilcox’s one-woman show The Honeymoon Period Is Officially Over was a huge success at last year’s Vancouver Fringe. She is back again this year with Shadows in Bloom. It’s a less developed sequel, but every bit as entertaining. She is once again on her own, traipsing barefoot across a bare stage, with neither props, nor costume changes. Central character 30-year-old Sandra has left the comfort zone of her north England home town and followed her well meaning, but quixotic sax-playing boyfriend to London. It doesn’t help that his bratty daughter Louise and old school chum Kate are presenting hindrances.

Ms Wilcox, a natural mimic, plays around a dozen characters, both animate and inanimate, including a pair of house plants: Kevin the calla lily and Pierre the sunflower. To make it easy for the audience she separates the three principal characters with a different regional (British) accent. Wilcox’s singular performance is greater than the sum of the production’s parts. 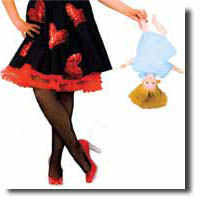 The Fringe Festival is often about innovative theatre and affording an opportunity for emerging talent. This Lucid Dream Production’s Capital, Alice certainly fits into the latter, but fails in its attempt to be ground-breaking. It uses the well-worn story-telling technique of presenting a socio-political observation through a children’s story. In an arcane revision of Lewis Carroll’s Alice in Wonderland, Alice, bored and weary of folding jeans, falls asleep in the department store in which she works. While catching some ZZZs she experiences a nightmarish encounter with a myriad of bizarre characters that offer some flawed conspectus about consumerism.

While much of the dialogue is smart and witty, the physical comedy seems improvised and indulgent. Of the three performers, only Anoushka Ratnarajah is able to make it feel natural. For some obscure reason all three actors take a turn at playing Alice causing the production to descend into a form of théâtre de l'absurd. During Ratnarajah’s stint as Alice she likened a scene to a “bad Tim Burton movie.” I’ve never seen a bad Tim Burton movie, but it surely couldn’t be more annoying than this. 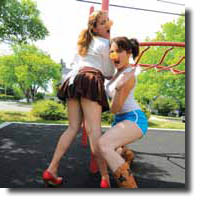 Alice Nelson has been one of the poster girls for this year’s Fringe (just check out the cover of this week’s Georgia Strait). In Raunch with partner Jacqueline Russell, she draws inspiration from Ariel Levy’s pro-feminism essay Female Chauvinist Pigs: Women and the Rise of Raunch Culture. Nelson and Russell offer a humourous, and at times a hard-hitting analysis of the raunch phenomenon and its effect on society. They place as much (perhaps even more) blame on women, especially those proponents of “lipstick feminism” who proffer the theory that sexual attraction is empowerment; thus resulting in the backward progress of women’s liberation.

A weighty issue indeed! Fortunately, this pair of talented comic performers never really takes themselves seriously, getting as many laughs from men in the audience as women. Among some of the “raunchiest” aspects that receive their brand of laconic humour are: breast augmentation, the HooterTM restaurant franchise, Girls Gone WildTM and hip hop culture. According to Nelson and Russell, “Hotness” is the corporate model used to sell everything in America. Of course they’re preaching mostly to the already converted. With the creators slick use of multi-media, puppets and comedy, this show could be adapted as a teaching tool and taken into high schools. 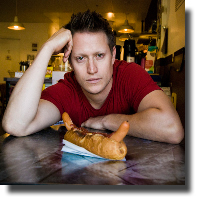 A lot of actors do television commercials; for many it’s their ‘bread n’ butter’ between regular gigs. For a few, appearing in a badly conceived commercial can be a humiliating experience and even result in the actor not getting serious work for a long time after it’s no longer seen. Stretch Dog is Robert Olguin’s semi-biographical account of an actor’s reluctance to act in a commercial for a super-size hot dog in which he is obliged to dress-up as a ketchup bottle.

For roughly three-quarters of the 45-minute show the audience is allowed to eavesdrop on an intense conversation between a luckless actor, played by Olguin, and his pragmatic agent Marty, who is neither seen, nor heard. The actor’s problem is that he has become a new father at the same time that his career is in the doldrums – and he needs money. Olguin’s single-handed dialogue occasionally degenerates into a rant; at other times, he delivers graphical anecdotes of life-changing incidents that are simultaneously hilarious and poignant. At one point, he describes in explicit detail being stuck in traffic with a first date listening to Led Zeppelin’s When the Levee Breaks on the radio, when he is unanticipatedly struck by a severe bout of Montezuma’s revenge.

Pacific Theatre has arguably the best lighting system of any small venue in Vancouver. Director Michael Wipf used it to some advantage in amplifying the drama of this compelling piece of theatre