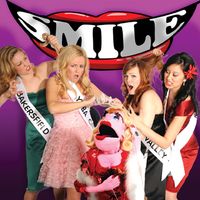 There was a large audience on opening day at the Fringe for this musical by Marvin Hamlisch (music)and Howard Ashman (book and lyrics) which was originally presented on Broadway in 1986 and nominated for a Tony Award. The full-house audience cheered and wowed at this funny, fast-paced musical set behind the scenes at a high school pageant in California. I'm sure that this will be one of the picks of the Fringe again because of all the effort that went into this production by Awkward Stage Productions. There was nothing awkward about this production which I consider produced almost professionally and in only four weeks. The costumes, talented singers and dancers who were also puppeteers. Amazing indeed! There are 23 actors in the company, and the main characters alternate roles on different performances. I think this is the only company that has come up with a full-length musical (90 minutes), as most Fringe shows don't go over an hour. The company won a pick in last year's Fringe for "13 the Musical". 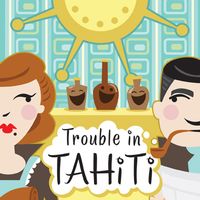 An opera by Leonard Bernstein adapted by the Vancouver Concert Opera Co-operative referred to as "A suburban opera for the 21st century" starring Natalie Burdeny (Contralto), Ed Moran (Baritone), Katherine Landry (Mezzo Soprano), Paul Just (Tenor) and Grant Wardlow (Tenor). Interesting approach of Bernsteon as he uses a chorus in the Greek Aristotelian method, but jazzes up the songs to combine a contemporary-style chorus singing in jazz fashion narrating the story of a couple living in suburbia, constantly arguing but reconciling at the end. The company adapts it to suburbia in the Greater Vancouver area, as they sing and mention Coquitlam, New Westminster, Delta, North Vancpuver and so on. Very innovative approach to the Bernstein opera, and excellent performance by these five talented opera singers. 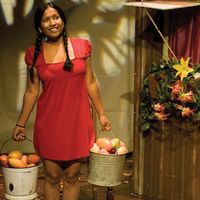 Under the Mango Tree

Very moving performance by Veenish Dubois, in this one-woman show, where she plays multiple characters -- the story’s central character Timal, as a child, a teenager and an adult, and four other characters-- Timal’s father (referred to as Bappu), her Grandmother, her aunt and her first child. This is a semi-autobiographical story when her father left in 1970 for Canada and she was left behind with her grandparents. There wasn't a dry eye in he audience after her one-hour performance. This play was one of the Picks-of-the Fringe in 2009.

Very funny. The audience was giggling all throught this 65-minute performance. New York comedy theater duo Harrington and Kauffman return to the Fringe after a more than 10 year hiatus featuring the characters Gustave and Nhar from Hotel California (2000 Fringe). They started off with the song Hotel California perhaps to remind the audience that they did this show here before. Very creative with wooden frogs where everyone participated with their own wooden frogs provided by the actors (but had to be returned). Cabaret Terrarium is sung and pantomimed as the duo acted out a tale of a Belgian cabaret singer found frozen in a block of ice at the North Pole,then travels the world in search of his memories and clues to his own shady past. .The only peeve I have about this show is why would the microphone be used for singing only? I was in the front row and when Harrington got off the mike, I hardly could hear what he was saying.