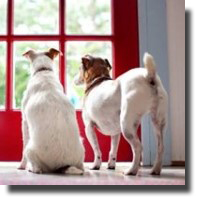 Since You Left Us

We all know people who treat their animals like family, but how many families have we met where that relationship is the most sane one? In Since You Left Us Susinn McFarlen has made us think about the nature of meaningful relationships by presenting a family that struggles to understand itself as a unit given its array of vastly different personalities. She presents a believable scenario that mixes old resentments with longings for love and brave attempts to start fresh. Allan Morgan’s directorial talent is superbly showcased in the ebb and flow of the play. To make the deeply divergent characters’ birthday reunion credible while showcasing the intended humour, seriousness and introspection requires a fine balance, and Morgan achieves it.

Kudos to the cast! Kathryn Kirkpatrick’s portrayal of Denny, a doting, defensive and challenging pet lover who is forced to host this celebration of non-believers, is spot on. Wendy Noel’s moments of emotional outpouring are her strongest in the role of her long-sober sibling, Fanny; and Joel Ballard’s ease with the often quick emotional changes required in his role as Danno, her son, makes him a talent to watch for. Kim Kondrashoff plays Mike, the third sibling. This character seems more shallowly drawn by McFarlen until late in the play, presenting a real acting challenge for Kondrashoff in the early stages, but his considerable talents make Mike work. Mike’s friend, Chuck, is well played by Bill Croft, in a relatively small role with pivotal importance in the plot. Chuck is not only Mike’s friend and work mate, but is also the lover of Mike’s mother, Dolly, the birthday celebrant. Played by Denalda Williams whose antics often have the audience in stitches, Dolly insists on living her life her way in the midst of the others who insist on the same for themselves in their very different ways.

The technical aspects of the production were comfortable, efficient and perfect for the mood and action of the play. Sets were minimal but very functional, and portrayed a credible environment for a single, older dog-lover who doesn’t have much materially. Lights and sound were effective and well done, serving the purposes of the play without distraction. The “visitation” was especially nice – neither too much nor too little.

Since You Left Us is a delightful experience. Catch it if you can during the busy Fringe season. On the Fringe’s “Not” to “Hot” scale I rated it a 9 out of 10. 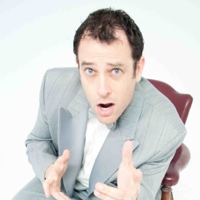 Every Story Ever Told

"Once upon a time there was a man (Fringe Superstar Ryan Gladstone) who thought he could tell Every Story Ever Told…in One Hour".

It's the very impossibility of this task that drives the show and gives it its form and manic humour, as Gladstone vainly tries various strategies and abandons them all. He begins by trying to tell one story in some detail: War and Peace. He does a pretty good job of getting through it but at this rate he's obviously not going to make it. So he tries a different tack, coming up with general themes and genres into which many stories can be categorized, and this allows him to count many stories as "told", just by mentioning their names. This is better but he soon realizes this is not going to work either. At this point the show becomes quite improvised, with Gladstone getting the audience to participate in the creation of an archetypical story that will hopefully contain most if not all of the elements that are common to all stories...and if he tells that story, then he's told them all. At least, that's the plan. This time things got surreal quite quickly and ended up in the creation of a story about a high-school principal (the hero) who is also a werewolf and is murdering the parents of the kids in the school. Obviously he would come up with a different story each performance, but cleverly, throughout this lengthy improvised section, he interweaves an amusing summary of all six Rocky movies, Chaplin's City Lights, and Dicken's Great Expectations.

Gladstone is an extremely energetic actor and he clearly thrives on his close interaction with the audience (he high-fived the whole front row when he came in). There was little psychological boundary between audience and performer, as there normally is in theatre. Quite an acting tour de force! 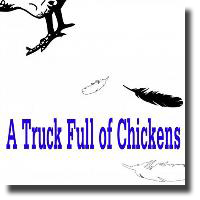 A Truck Full of Chickens

The story begins with two strange chickens (male and female chickens?) I think one should have been a rooster. The fellow played the ukulele and the gal a guitar. The play as you can tell by the title took place in the back of a truck. The sound effects of the truck starting up and the sliding effects of closing and opening the truck’s steel door were well done.

The chickens wondered why they were in the truck and where they were going. Well I guess we all know where chickens go when they die and it isn’t straight to heaven but to wind up as chicken soup on someone’s table first. Soon, we found out that the two strange chickens who have been playing and singing all this time are not chickens but infiltrators taking them to slaughter. Now all hell breaks lose.

I was moved by the performers by their determination and how uniquely they presented themselves. The encouragement for those with physical and mental challenges at Theatre Terrific impressed me.

As time went on the stage scene shifted over to a restaurant that served chicken dinners. There we find 3 chefs putting dinner on and a single customer was chosen from the audience, led to a table and served ….you guess?
It was fun, very different and to the entire production I’d like to say, “Good Job!” 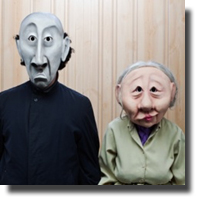 As the play opened, the simple stage was bathed in blue lights and the room was filled with the transcendent music of a powerful choir. Fischer emerged from the bathroom, a little old lady wearing sensible walking shoes and sagging in her high-belted dress. Her mask was molded in a charming expression of humorous mischief, while the mask of Grim, was smooth and fittingly neutral as Death.

Without any spoken dialogue, a vast repertoire of body language all helped the story to unfold. The soundtrack of music, along with the sounds of rain and a music box, added another important layer to what we were witnessing. In a touching moment when Fischer caressed the man’s jacket hanging on the clothing rack in her room, it was obvious how much she missed the person who used to be there with her. There were a lot of humorous moments, small and real, as Fischer put up a fight against Death, at one point sparring with him to the tune of Stayin’ Alive. At the end of the play, it seemed only fitting that Kate Braidwood, the mask creator, should emerge from behind the aged face of Fischer in this wonderful performance.