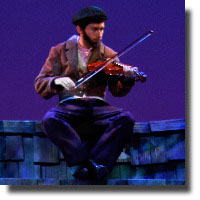 Fiddler on the Roof

If you want to get an insight and lessons on Jewish culture, this is the musical to see. Here, you'll learn about Jewish music, jokes, dances, history, traditions and so forth and so on. And the moderator who always looks up towards the balcony session with a special spotlight on him because he's always talking to God, complaining about his insecurities, is Tevye played by veteran actor John Preece, the prime mover of this show.

The show opens with a fiddler playing on Tevye's roof, and throughout the play, we see him fiddling along. That's why the play is conspicuously titled Fiddler on the Roof. The original Broadway production of the show, which opened in 1964, was the first run of a musical in history to surpass the 3,000 performance mark. It held the record for the longest-running Broadway musical for almost 10 years until Grease surpassed it.

In 1971, a film adaptation was made with Zero Mostel as the lead character. This show has enjoyed enduring international popularity, and the wedding song "Sunrise, Sunset" has become the theme song in many weddings around the world. Fiddler is also a very popular choice for school and community productions.

After watching this show, you come out of the theatre humming songs like "Sunrise, Sunset" and "If I Were a Rich Man". Really, these contagious songs keep you humming upto two days after you see the show. The other songs and actors were terrific.Antother song the audience enjoyed was "Matchmaker, Matchmaker" which also became a hit song.

Other than Tevye, I liked Golde, Tevye's wife, played by Nancy Evans. Her acting was the embodiment of the Jewish mother. Likewise, the three daughters of Golde and Tevye who marry men from different walks of life and wander away to different places, this one to Siberia, and the other to the United States, and another couple elsewhere, reflect the proverbial "wandering Jews" biblical phrase taken from Exodus.

Based on Tevye and his Daughters by Sholem Aleichem, the story is set in Tsarist Russia of 1905, and centers on Tevye, the father of five daughters, and his attempts to maintain his family and Jewish religious traditions. However, outside influences encroach upon their lives. He must cope with both the strong-willed actions of his three older daughters and with the edict of the Tsar that evicts the Jews from their village.

The musical is a tragi-comic reflection of the Jewish situation during the past century, the unwanted Jews, and today, it is "politically incorrect" to discriminate, especially in Canada. We've come a long way, but despite that, there are still pockets of discrimination here.

Canadians can identify with this timeless classic of American musical theatre, since successful musical theatre performed in Canada often originates from the United States. We still have a long way to go to develop our own musical theatre, but slowly and surely, Canadian theatre including musical theatre will eventually get there in the next decades to come, or earlier.