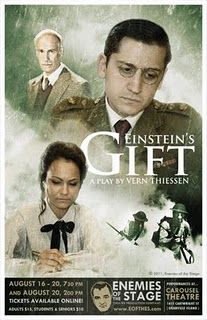 When you have a good play like this one which won the Governor General’s Literary award, and actors who can truly act, there is no reason to doubt that this formula will equal success. And indeed it was on opening night.

This play has been internationally produced, and returns to Vancouver again after nearly seven years. It was first presented by Firehall Arts Centre. Based on the life of Dr. Fritz Haber, a Nobel prize-winnng scientist dedicated to solving world hunger, the play is about two scientists. What makes it even more interesting is it's told through Albert Einstein. The two belonged to a circle of German scientists and ended up being good friends.

Both Haber and Einstein were Jewish, and in this play we see the beginnings of anti-semitism which was already brewing at the start of the 20th century. The characters represent two opposing poles: Einstein (Gabriel Patrich) is the pacifist who persuades Haber (Sebastian Bertoli) not to be involved in war. But Haber is ambitious and wants to rise in the ranks of German bureaucracy. However, when the Nazis take over, he is branded a Jew and he flees Germany where he joins up with Einstein.

I was impressed by the talent and acting abilities of these actors. Patrich emulated Einstein both in costume and speech quite convincingly, and Bertoli played Haber to the T as the ambitious man obsessed with becoming more than he could be. Emilie Leclerc was perfect as Haber's first wife; she even got an applause for her song-and-dance routine. Sarah Ruth as his exuberant second wife was impressive, and Robert Sidley playing German officers in both the first and second world war, and a third role as a minister, was quite versatile. Luc D'Ippolito and Andrew Ferguson were cast quite well in their roles.

This is the inaugural production of the company under Artistic Director Keegan Flick-Parker, and I wish him and the company all the best in their future endeavours. This play was definitely a good beginning, and if they maintain the quality of their productions, I'm sure they'll get the attention they deserve. Kudos to Chris Lam for directing this play effectively, and likewise to the rest of the production staff--costumes, sound, lights, and stage management for the smooth pace and flow of the show.