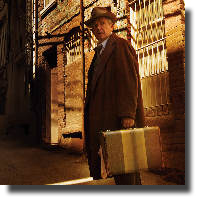 Death of a Salesman is Willy Loman’s story. Arthur Miller’s classic cautionary tale about a burnt-out salesman who has gone way past his best-before date takes some of its inspiration from a mythical Greek tragedy. Willy’s downfall comes about from his misplaced idealism that drives the belief in himself and his oldest son as being somehow destined for greatness.

Willy is a dreamer; as pointed out in the final scene, a legitimate prerequisite for a salesman. But Willy is also a “loser.” He’s a hard-working, essentially honest loser, but a “big, fat loser” nonetheless.

The playwright avoids specifying what it is that Willy Loman actually sells. But why? It could be because Mr. Miller feels it appropriate that Willy really represents “Everyman” and that not mentioning a specific product, we then as the audience are free to imagine him as a seller of building supplies, office equipment or pretty much anything.

The play is set in Yonkers, New York during the highly productive years that followed the Second World War. After thirty-odd years with the same company, his employer repays his loyalty by eliminating his salary and putting him on a commission-only contract. Perhaps through hubris or a desire to stubbornly hold onto his stale ambition, Willy refuses a job offered by his only friend without ever explaining why.

Linda, his doting wife, convincingly played by Donna Belleville, knows Willy better than he knows himself. Despite being shown neither courtesy nor respect she still loves him and is constantly being called upon to act as peacemaker between her husband and her oldest son, Biff.

Bob Frazer is heroically passionate as Willy’s headstrong and wayward son. A powerful counterpoint to Willy’s smaller-than-life character, he tries to reach out to his father in love in the play’s poignant penultimate scene. Younger son Happy (played with unbounded enthusiasm by Kevin K. James) is an eternal optimist (what else, with a name like Happy), who frequently promises more than he can deliver.

But it’s really Tom McBeath who is at the epicentre of this theatrical seismism. He portrays Willy as a disconnected dreamer who has been down on his luck so long he wouldn’t recognise success if he passed it on the street.

Death of a Salesman shows the playwright as a fierce critic of the so-called American Dream. It’s an odd paradox therefore that Miller was popularly known as "the man who had all the luck" – he even married Marilyn Monroe.