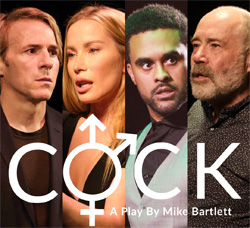 Coldwater Communications
COCK by Mike Bartlett
WHEN & WHERE June 14 – 19, 2021 | Streamed via Broadway on DemandTM

COCK is Mike Bartlett’s four handed, single act play propounding an exploration of love, sex and physical attraction. When the play opens, it feels like we have joined it in the middle. We catch John (Troy Mundle) in a personal crisis of sexual identity. He vacillates between his long term gay relationship with a partner with whom he shares accommodation and a recent encounter with an attractive divorcee.

Bartlett wrote the play in 2009 and set it in London at that time. However, the essential theme is just as relevant today – perhaps even more so. Actors seem to be in a constant state of mobility, moving around each other inside a roughly ten-foot diameter circle. While actors only leave the circle when they withdraw from a scene, camera operators however, appear to enter and leave at will. This business around the performance I found to be at times distracting.

Bartlett has created an interesting and provocative triangle with John, the only character referred to by name, at the centre.
The protagonist seems continuously confused: both about his sexual predilection and the core of own person, while both his male partner (Nathan Witte) and his newly acquired heterosexual interest retain no doubts about who they are and what they want.

All four actors truly commit to their respective characters. Especially Lee Tomaschefski, the only female in the cast, who, for whatever reason, sees John as a potential soul-mate and is aggressively uncompromising in the pursuit of her objective. While he has less to do than the three main cast members, John Prowse as the father of John’s gay lover delivers a nuanced performance; convincingly liberal in terms of his son’s sexuality, but much less progressive in his attitude towards women.

I would love to see this play performed in person on stage with this Vancouver based cast when health restrictions are finally lifted.