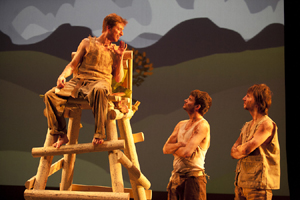 Archibald's insights on political power is expressed here. This play reminds me of Farsas Contemporaneas of Spanish playwright Antonio Martinez Ballesteros, a protest writer of the 1970s, where he starts off the play with the apes evolving to humans. In the world of the apes, Ballesteros shows how brute force was the key to dominance. And as man evolved from the apes, he becomes more sophisticated and manipulates by more Machiavellian means. This is what came to mind as I was watching this play-- the story of humanity where history repeats itself, We have Hitler and other dictators later on toppled by others who then take their places in high chairs. The revolutions in Russia, the toppling of dictators in Latin America--but what happens next? The rebel leaders become the dictators themselves.

In this play, a man is equal to other men, but after a while, someone wants to be more superior to the others. So he builds his chair symbolizing superiority to others. This one-hour show was well-received by an audience of less than 20 at the Historic Theatre at the Cultch. Perhaps the theatre will fill up as the days of the Neanderthal Festival continue on till the end of this month. The use of other media such as a movie in the background depicting man hunting and cutting down trees in animation was interesting. The acting was good, I wouldn't say superior, but good for amateur actors. Normally, as amateurs, one tends to go overboard, such as shouting too much. There are many ways of showing frustration without having to shout, especially if you're in the front rows. As an actor, I was trained to adjust my volume depending on what type of theatre you're in: if it's intimate, lower your projection, and if it's QET or the Orpheum, well then go a few decibels higher.

I wouldn't say that this was an excellent production. I remember directing similar plays in university, and it's all part of growing and eventually getting into professional theatre. But Itsazoo has been doing innovative plays in the past, such as Bridge Mix using an indoor parking lot as a venue,which was quite unique, and I encourage the company to continue doing plays that are out of the ordinary so that it can maintain its uniqueness.