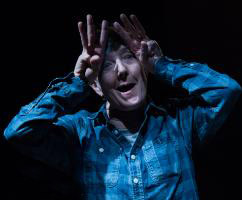 In her roughly one-hour, one-woman show Certified, Jan Derbyshire asks her audience to be her Mental Health Review Board and at the end of the show judge her level of sanity. Audience members are given colour-coded cards similar to those seen in use by soccer referees to caution players on the field.

Derbyshire takes her audience on a high-octane, whirlwind tour on the best and worst aspects of Canada’s mental health system, with the worst outweighing the best by quite a lot. Derbyshire’s show, which has more of a look-and-feel of a streamed comedy special, rather than theatre, was gleaned and polished through performing at Fringe Festivals.

The Alberta born comedian confronts controversial questions like who defines “crazy?” Who is really qualified to decide on who is or isn’t? Much in a similar manner to children inventing an imaginary friend to relieve boredom or even loneliness, Derbyshire handles stress by imagining Manitoban author Miriam Toews as her travelling companion. She also, for reasons best known to herself, finds comfort in “smoking” candy cigarettes – which she ludicrously demonstrates on stage.

At one point during the show, Derbyshire displays a tattoo, which, from where I sat looked like

- the Chinese symbol for "crisis" that she (incorrectly, as it turns out) claims to signify a combination of “danger and opportunity." It was an interesting diversion, but I hope she doesn’t actually believe it.

Oscar Levant, an edgy, somewhat unhinged, but brilliant philosopher was remarked: “There's a fine line between genius and insanity. I have erased this line.” Jan Derbyshire showed us how easy that can be achieved.