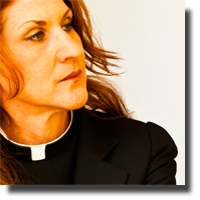 one2theatre
The Busy World is Hushed by Keith Bunin

The Busy World Is Hushed is a triangular domestic drama by American playwright Keith Bunin, who borrows its title from an end of day prayer by John Henry Newman. At the centre is Hannah (Gina Chiarelli), a widowed Episcopal minister and religious scholar. She is also a caring, if overly safeguarding mother to her quintessentially vagabond son, Thomas (Sebastian Kroon) whose ephemeral lifestyle apparently goes against his mother’s sensibilities. Thomas is more a nonconformist than a free-spirit; one senses that his dilettante ways aren’t necessarily from choice.

We first meet Thomas in the second scene when he bursts into his mother’s library, his hands covered in blood (not his own) and porcupine quills sticking out of his leg. Hannah is in the process of interviewing Brandt (Adam Bergquist), a gay man in his early thirties a potential assistant and ghost-writer. Brandt is distraught over his father been diagnosed with brain cancer and needs the work as a diversion.

When Thomas enters the room, the play’s focus, as it does in subsequent scenes, immediately switches to him. This aspect may be one of Busy World’s few weaknesses. The play is essentially allowed to become Thomas’s story, when really it should be Hannah’s. After all, it’s her system of beliefs that drives the narrative, but there is so much movement to contain Thomas’s inter-relationships with Hannah and Brandt, who through the prompting of his mother, becomes his fast friend and lover. I also felt that a passionate liaison is hardly plausible considering that Thomas is a devil-may-care, physical individual, while Brandt is very much contemplative.

All three actors more than acquit themselves in their respective roles. In particular, Gina Chiarelli, who turns in a nuanced, complex performance as the Reverend Hannah, displays both intelligence and vulnerability. Bergquist’s Brandt is the least interesting of the three. Nonetheless, he manages to draw some sympathy to the character.

Michael Schaldmose’s set, though seemingly cluttered, is attractive, functional and observes all the aspects of the script. The pair of religiously themed stained glass windows (one depicting the Annunciation, the other the Nativity) are not just nice decoration, but establish a point of reference in the storyline. To a lesser extent, the same is true of Yulia Shtern’s clothing choices. Though, perhaps the production budget might have allowed a few tools in Thomas’s tool-belt. Richard Wolfe sustains an even pace throughout, wisely allowing the actors artistic freedom.

Keith Bunin certainly gives theatre audiences plenty to consider in this engaging new play. While there are spiritual streams running through, it doesn’t burden the audience with too much religious heft.