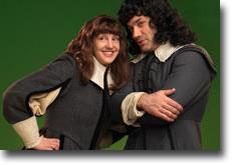 Bard on the Beach
As You Like It by William Shakespeare

There was plenty to celebrate last night at Vanier Park. It was not only the Bard on the Beach Opening Night performance of Shakespeare’s As You Like It, but also the Official Opening of the Mainstage Theatre, a 742-seat custom built tent. The ever-entertaining, Christopher Gaze, officiated the ribbon-cutting ceremony prior to the show, and before he took his seat, he cleverly commented, “I hope this new stage is - as you like it.”

Written as a comedy back in the late 1500’s, Shakespeare weaves issues of family dysfunction, true love, deception, tolerance and optimism together with fast-paced, witty dialogue that keeps the audience busy mentally translating ‘old’ English into ‘modern.’

The story centres around two characters, Orlando (Todd Thomson) and Rosalind (Lois Anderson) who, after a brief meeting, fall in love. Subsequently, Orlando flees to the forest of Arden to escape his brother’s plan to kill him. Rosalind is also banished from her dukedom by her uncle, so she leaves for the forest of Arden with her cousin, Celia (Luisa Jojic) and the local clown, Touchstone (Ryan Beil). Rosalind has disguised herself as a young man named Ganymede, and as a result, she finds herself in the company of Orlando, pretending to be a comrade and offering him advice on how he can prove his love to Rosalind. This creates wonderful exchanges that produce gales of laughter from the audience. As well, several skits take place with various groups of foresters, filled with songs and joking banter. On a more serious level, others philosophize on the meaning of life - one of the characters being Jacques, a melancholic traveler (John Murphy), who repeatedly steals the show with his captivating voice and stage presence.

All performers were brilliant, and a few merit special mention. Lois Anderson is a great Rosalind and a magnificent Ganymede. She brings perfect body language, facial expression and vocal delivery to her part as the young man, which inevitably results in hearty laugh. Fortunately for the viewers, her voice carries well whether she is facing them or not. Ryan Beil as the town clown is hilarious. He has the gift of delivering lightning-speed dialogue along with comical gestures that are, for the most part, understood - not always an easy task when spouting Shakespeare.

Director, David Mackay, has returned for his 13th season with Bard and, once again, he proves his expertise as a Shakespearian aficionado. Mara Gottler’s costumes, Melissa Young’s choreography, and Murray Price’s sound design were excellent complements to the production.

Check the schedule this summer. Bard on the Beach is certainly an evening to experience whether one is a Shakespeare buff or not, and As You Like It is one of his best on which to cut your teeth. Enjoy!!

One thing worthy of note: Several shutterbugs learned last night that photographs are not allowed in the new venue, even between acts, as the actual stage is – surprisingly – copyrighted.