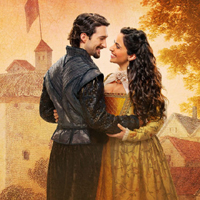 Bard on the Beach
Shakespeare in Love by Marc Norman & Tom Stoppard, adapted for the stage by Lee Hall

Bard on the Beach has adapted the wildly successful movie, Shakespeare in Love, for the Vancouver stage, inspired by its original conception at Edmonton’s Citadel Theatre in association with the Royal Manitoba Theatre Centre in Winnipeg. This production continues Bard’s tradition of excellence in its 30th year of delighting and educating audiences.

The play takes us into the private life and times of William Shakespeare, particularly into the world of theatre at the time. While what we see of Shakespeare’s personal life is dubiously factual, the historical and social background is relatively accurately portrayed. Director Daryl Cloran is to be congratulated on delivering a sparkling piece of theatre. The movement of the plot, the clarity of its development, and the inspired performances of all actors in this production illustrate focused and sensitive direction.

Charlie Gallant is a fine Will Shakespeare. Caught up in a tangle of producers’ conniving tactics, the social constrictions of theatrical life, and self-doubts about the quality of his writing, the character musters every ounce of energy and imagination to fulfill his goals. Gallant’s talent is matched in the performances of all the actors on stage. Austin Eckert masterfully oozes the self-confidence and easy good nature that comes with the success and recognition enjoyed by Christopher Marlowe at the time. Ghazal Azarbad inspires in her drive to be part of theatrical life in an age when women were not permitted to do so - especially women of high society such as her Viola de Lesseps; and the intrigue in her accidental romance with Will Shakespeare is enchanting. Her antics confound her nurse, convincingly played by Susinn McFarlen, and frustrate her betrothed suitor, Lord Wessex, portrayed by Anton Lipovetsky with just the right amount of dry entitlement expected of a penurious aristocrat of the time extending family title to a rising merchant family for a generous dowry.

Actors portraying the theatrical life of the time deserve equal praise for their outstanding performances. The lurking presence of Kate Besworth’s somewhat disturbing John Webster is eerily delightful, and Kamyar Pazendeh’s Ned Alleyn is suitably conceited as a successful actor of the day. Scott Bellis and Warren Kimmel thoroughly entertain as Henslowe and Fennyman with their tactics to get the most theatre with the least financial investment. Kudos to the rest of the theatre players for their spirited and utterly believable performances.

Periodically during the performance, the audience is graced by the presence of Queen Elizabeth I. Jennifer Lines gives a truly wonderful portrayal of the salt and vinegar personality of Her Majesty. Her unconventional love of theatre, especially if dogs are part of the act, is endearing; and her quiet understanding of the sometime impossibility of marrying for love is sweet. Speaking of dogs, we must acknowledge the talent of the canine star playing Spot.

The acting talent of this production would not shine were it not for the masterful work of the production team. Cory Sincennes’ remarkable sets and costumes are awe-inspiring, adding to the outstanding colourful action of the production. Mishelle Cuttler’s musical design is truly inspirational and educational, giving us tastes of songs and music of the period. The choreography and fight moves are energetic, at times athletic, and thoroughly entertaining. And lighting sets the mood of every scene with just the right nuance.

Judging by the enthusiastic standing ovation and call back of the performers, this audience of Shakespeare in Love would invite everyone to a hugely entertaining, colourful, and inspiring evening of theatre. I would, too.