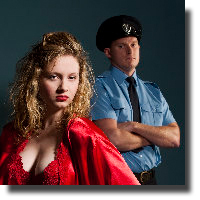 Rebecca Gilman’s clichéd social commentary manages to indulge the audience in an interesting character study but offers little by way of satisfying entertainment. Blue Surge is considered to be one of the playwright’s better works; deriving its title from Duke Ellington's evocatively melancholic Blue Serge played in a minor key and also provides an incidental soundtrack through the second act.

Dramas involving two people coming together from opposite sides of the romantic equation are a dime-a-dozen. Except in most cases the protagonists overcome the odds, eventually connecting with each other; or at least, part ways all the better for the encounter. Curt, an unimaginative vice cop and Sandy, an eighteen-year-old, who earns a crust offering sexual services in a brothel that poses as a massage salon would have been better off had they lost and never loved.

Curt and Sandy are trapped by their predisposition to accept the status quo. Neither harbour expectations of any substantial return on their investment in life. Curt just knows he is unlikely to go any further in the police force and the zenith of Sandy’s ambitions is to make enough money as a hooker to be able to retire from the business at thirty. It’s doubtless no coincidence that Jonathan Tsang’s imposing ‘red-brick’ walls that stretch across Studio 16’s stage resembles the inside of a prison cell.

Curt is already engaged to Beth when he first meets Sandy during a botched raid on an illegal massage parlour, but there is obviously something missing from their relationship. Despite the apparent gap in their moral aptitude, he feels more at ease with the street smart teenager than with his fiancée.

Director Sabrina Evertt makes the best of a languid script and moves the play along at a lively pace. One of the few lighter scenes takes place in the first ten minutes with Curt and his partner Doug posing as customers in a bungled attempt to bust Sandy’s salon.

Jeremy Leroux gives an (perhaps intentional) uneven performance as Curt; playing “good cop, bad cop” on his own, as he oscillates between underplaying and overplaying his role. Newcomer Megan McGeough at least looks the part, and generally acquits herself well as a young woman who has found it all too easy to play the hand dealt to her.

Of the other three performances, Claire Lindsay (who may never live down wearing a polo-necked sweater as a cheerleader in Debbie Does Dallas) has the least developed part as Curt’s haughty girlfriend Beth. She only gets one strong scene, a stormy confrontation with Curt in the second act, but she makes the most of it. Tara Pratt and Chris Rosamond are bordering believable as a parallel couple, Heather and Doug.

Despite its patent flaws, Twenty Something Theatre’s economic production does have much to recommend it. One just has to accept that hookers and cops are just as ‘screwed-up’ as the rest of us – hardly much of a stretch.