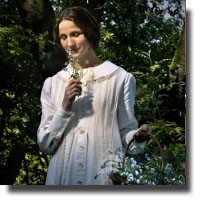 Though she only had a mere handful of poems published during her short and what appears to have been an unremarkable life, a century and a quarter after Emily Elizabeth Dickinson wrote her last letter to the world, performers are still paying homage to her enigmatic artistry. Her prose is said to have inspired the Paul Simon song For Emily, Whenever I May Find Her and her poetry is very evident in Natalie Merchant’s Because I Could Not Stop for Death.

The Belle of Amherst is less dramatic theatre than an invitation to Emily’s parlour for afternoon tea and homemade black cake. It’s less a formal autobiography, but more insouciant conversation with a distant relative. Renée Bucciarelli is engaging and believable in the poet’s sensitive eccentricity and in her obscure artistry.

Bucciarelli provides a poignant portrait of a self-confessed social maverick who turned out to be one of Americana’s most beloved poets, whose talent at baking and gardening matched her skill with words. While the actor’s portrayal captures the complexity of Dickinson's personality, she reveals few warts in her subject’s character; she wants the audience to fall in love with her quirky manner and reclusive genius. It was difficult not to feel emotional about Dickinson’s disappointing second act meeting with Thomas Wentworth Higginson, a man she regarded as her mentor and "preceptor."

For a relatively small production, the technical elements were of a high standard. Ms Bucciarelli took personal responsibility for recreating the historically accurate white dress worn during the performance (see photo on the right). The set design was unaccredited, but the beautiful antique furniture like the table trolley and upright piano gave an authentic look and feel to Emily Dickinson’s “homestead.”

A hundred minutes is a long time for a monologue performance, but the indefatigable Renée Bucciarelli will reward your assiduity with a compelling insight into the life of this recondite and mysterious woman.

This is my letter to the world, that never wrote to me - Emily Dickinson.