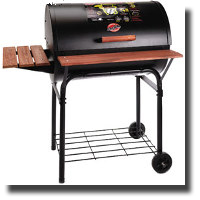 Family drama is something we can all relate to, and is therefore almost universally engaging. The North Vancouver Community Players' Barbecue Blues, written and directed by David Read, takes full advantage of our voyeuristic tendencies in this day-in-the-life narrative of the Campbells, a middle class family working through their issues. The intimacy of the tiny theatre at Hendry Hall is perfect for bringing us into the living room and life of the Campbells.

The action revolves around Liz, the mother/wife figure played earnestly by Julie Coghlan. She is a reasonable character with legitimate thoughts and concerns, but whenever she voices them, she is belittled by her family. Oddly, she smiles whenever they do this. Her children are Penny and Eddie, played by Jasmine Carlson and Matthew Robertson, who do an excellent job of solidifying the belief that teenagers are sociopaths. The family is rounded out by husband/father Jim, a well-meaning but insensitive character played by Kevin Flatley.

The plot is not complex. There is to be a barbecue in the evening, featuring Jim's unpleasant boss, T.C.(Roger Kettyls) and his wife Annabelle (Isabel Simpson); Marion, Jim's floozy friend with the heart of gold (Cayla Brooke); and Karen, Eddie's hockey coach's wife (Yvonne Arnason.) During the lead up to the barbecue and the party itself, predicaments arise, largely due to unnecessary secrets and poor communication.

Cayla Brooke as Marion the floozy is the highlight of the show, with her earthy wisdom, goofy wisecracks, snorty giggle, and bizarre compulsion to randomly break into song -- an odd feature of the play that I think may have been thrown in because she happens to have a nice singing voice. T.C. is also great as the obnoxious lecherous drunk, as is Karen in playing the airy-fairy drunk with a persecution complex. (Actually, Arnason would appear to be an excellent actress, but the role of Karen is a small part. I would be interested to see her in a larger role at some point.)

Barbecue Blues is not without its minor flaws. Character interactions and reactions don't always feel entirely natural. Specifically, people seemed to smile and laugh a lot after being insulted or receiving unpleasant news. However, this is more than offset by the infectious buoyancy of an enthusiastic cast that is obviously having a great time on stage. I left Barbecue Blues feeling well entertained, and I walked out with a smile on my face, a bounce in my step, and a song that's still stuck in my head.