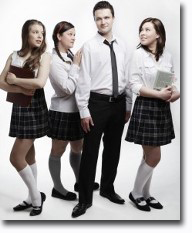 bare: a pop opera is provocative and at times moving musical theatre. The journey through high school is a microcosm of life itself. The merry-go-round of relationships, for some, the isolation of non-conformity and just the stress of peer pressure can be preparation for the looming real world.

Peter (Braedon Cox) and Jason (Lucas Blaney) are seniors at a Catholic boarding school who, despite the rigid doctrine of the Church, have become gay lovers. Only one of them wants to emerge from the shadows of a love that dare not speak its name* and broadcast his sexual inclination to the world. It’s not Jason; an overachiever who likes to play on both teams. While continuing what seems like a committed relationship with the hyper-sensitive Peter, he also embarks upon a heterosexual dalliance with the pretty and promiscuous Ivy (Lena Dabrusin).

The outcome of Jason’s emotional carelessness turns tragic when Ivy recklessly falls in love with Jason and finds herself pregnant. Jason is so used to everything falling in his path; he is ill equipped to deal with such abstruse situations.

Tandem to the play’s main plot is the school's musical production of Romeo and Juliet where Jason and Ivy are selected to play the protagonist couple. The aspect of Shakespeare’s classic tragedy offers a mirror to the story unfolding on stage. Among of the show's most engaging moments is hearing Shakespeare's dialogue set to rock music.

Braedon Cox gives an inspired nuanced performance as Peter. He makes you feel his heartache; especially in the agonizingly long scene when his mother confounds her son’s attempt to tell her about his sexuality, preferring to remain in a state of denial.

I particularly enjoyed Jennifer Suratos’ performance as the sympathetic Sister Chantelle whose proclivity for tough love provides a moral compass for the play. Also perhaps worthy of special mention: Emma Leigh Hillier as Jason sarcastic sister Nadia with her rendition of the self-deprecating Plain Jane Fat Ass and Jeremy Fornier-Hanlon (why do these young actors need such long names?) as the resident dealer Lucas with his amazing hip-hop version of Wonderland.

The cast member that gets the worst rap is the Catholic Church itself. I sometimes felt that Jon Hartmere and Damon Intrabartolo were less drawn to relating a love story than to hold the Catholic Church accountable for its brand of religious dogma. This especially manifests itself in the role of the priest whose attempts to help the boys are neutralized by Catholic canon.

Director Ryan Mooney’s keen direction keeps the audience totally engaged and wondering about what might happen next. With the help of a hard-working young cast he has pulled together a brash and high-spirited production.

bare: a pop opera is Hartmere and Intrabartolo’s semi-autobiographical, fully developed rock opera, consisting of around three dozen well crafted, though not necessarily memorable songs. Unless you’re a fundamental Christian there is much to commend in this relatively unknown piece of musical theatre.