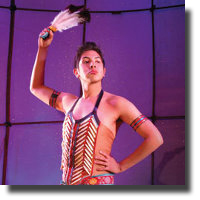 Agokwe (pronounced agoo-kway) is an Anishinaabe word that means “Two-Spirited.” The touring production of the same name revolves around an Anishnaabe youth named Jake who identifies as gay, or two-spirited (featuring elements of both a male and a female spirit together in one body) and develops a crush on a teenage boy from a neighbouring reserve.

Agokwe is a one-man show, featuring the talented Toronto-based Waawaate Fobister playing multiple roles – both male and female. Fobister is a proud Anishnaabe from Grassy Narrows First Nation with a very unique and impressive list of credits to his name. He was quite skilled at transitioning between characters and keeping the audience entertained with his witty and occasionally risqué dialogue.

Throughout the course of the 75 minute play, Fobister explores themes including aboriginal culture, sexuality, and alcoholism, as he weaves a tale through dialogue, dance, and creative movement. His two male characters first notice each other at the Kenora Shoppers Mall and ultimately connect through a mutual love of movement- Mike is a hockey player and Jake is a dancer. While I enjoyed the multifaceted performance, I felt the pacing was a bit off. I felt like most of the show was spent leading up to a brief climax that ended predictably without being fully explored. Thankfully the lead-up delved into complex issues facing gay youth today, especially those living in small communities that made it worth the watch.

While the underlying plot may have been a tad predictable, what makes the production unique and mesmerizing is the creative use of dance, costuming, props, and projections and the addition of aspects of Aboriginal culture – one important takeaway was that, long ago, youth were encouraged to make the most of the special spirit they were given, rather than try to conform to be like everybody else.

To say the production was visually stunning would be an understatement. Thanks in part to the talents of Set and Projection Designer Andy Moro and Lighting Designer Kimberly Purtell, matched with Marc Meriläinen’s original music and Lyon Smith’s sound design, and Erika Iserhoff’s costuming, the show would have been artistically dazzling even if no words were spoken. Agokwe won 6 well-deserved Dora Awards in Toronto last year including Best New Play and Outstanding Performance by a Male in a Principal Role.

The show was well-received, with a great deal of laughter and an appropriate level of sorrow from audience members who gave Fobister a standing ovation at the end of his performance. Agokwe was developed as part of Buddies in Bad Times Theatre’s Queer Youth Arts Program.