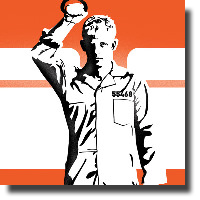 In the play’s stark and disturbing opening scene, we see Cruz, a young Puerto Rican struggling vainly in a recitation of The Lord’s Prayer, much to the vexation of the other inmates and the duty warden. The conflict sets the tone for the rest of play as it examines the way the penal system, society in general and culture affect attitudes. When we first meet Jenkins, he’s an anti-celebrity in the exercise yard of a lockdown wing on Riker’s Island, joshing with Warden D’Amico (Evan Frayne). Despite the bleak situation, his mood is buoyant. That only lasts until D’Amico is abruptly and without explanation is replaced by the more malevolent Warden Valdez (Andrew McNee).

At some level, Guirgis offers the audience two distinct allegories in one play with each of the protagonists finding a different path to reconciliation and salvation. It’s not Jesus they hope to see on the ‘A’ train, but themselves.

But it’s when two prisoners come together in the second half of the play to confront and confide with each other that Guirgis’s skill at tackling empyrean themes becomes evident. Much like his Last Days of Judas Iscariot, this play, peddles the credo of redemption and supposed free will.

Like Guirgis’s story-telling, Angela Konrad’s direction is purposely uneven; in the same manner that Cruz and Jenkins’ lives in confinement become stifling and non-linear.

Carl Kennedy is outstanding as the born-again Jenkins, a character that is some twenty years older than himself. He almost eclipses Robert Olquin’s exceptional performance as the discombobulated Cruz who runs the entire gambit of temperament from belligerence to final contrition. Andrew McNee was almost too real as the menacing Valdez. So much so, that I half expected him to take out his night-stick and whack one of his cast mates. In contrast, Kerri Norris underplays the role of public defender Mary Jane Hanrahan, Cruz’s Irish-Italian lawyer. Norris, who also provides incidental narration doesn't project the personality of a supposedly savvy attorney bent on winning her client’s acquittal at any cost.

Guirgis doesn’t offer any new answers with this play, but the questions he asks are well worth contemplating.