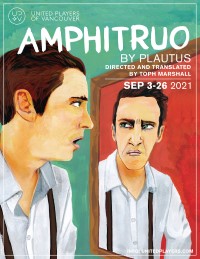 The Roman dramatist Plautus is best known nowadays - if known at all - as author of The Menaechmi, a play about twins separated in infancy and the source for Shakespeare's Comedy of Errors. Shakespeare is generally given the credit for upping the ante and introducing a second set of twins, but possibly this play, Amphitruo, gave him the idea - duplicate house slaves, duplicate husbands, and 1 wife. There the resemblance ends.

We are in Thebes; Alcumena has caught the eye of Jupiter who disguises himself as her husband in order to spend quality time with her while Amphitruo is conveniently away at war. Jupiter's son, Mercurius the trickster god, disguised as Sosia the house-slave, guards the door. When the real Sosia arrives home, he is amazed to find himself already in his place. Farcical confusion abounds and is re-doubled when Amphitruo returns. Mercurius teases them both into doubting their own existence and then into doubting Alcumena. Alcumena, however, knows exactly who she is and what happened where and when. Heavily pregnant - Amphitruo left 9 months ago - she is confident she welcomed him home last night. Amphitruo is jealous now as well as confused. And when Alcumena gives birth to twins, it is clear only the gods can resolve the situation.

The cast handles confusion and doubt with style and lively interaction as the three humans try to unravel the conundrum. Joan Park delivers a glowing performance as the feisty Alcumena. Simmering jealousy leaks from Ayush Chhabra's(Amphitruo) tight, polite control in a series of tiny, hilarious convulsions. Claire deBruyn(Sosia) delivers an agile "clever slave", always checking the angles and bringing musical theatre to the Roman stage in surprising but wholly satisfactory ways. Camryn Chew (Mercury) sturdily bears the weight of the play's leisurely introduction, Matt Loop is a smarmy, self-satisfied Jupiter. Erin Purghart plays all the other characters, changing age and sex as required to Mercurial standards.

There are a great many other pleasures in this production: the neat verse translation by director Toph Marshall, a huge, anachronistic clock marking the god's lengthening of the night and shortening of the day, the added songs, also by Marshall and composer Alex Silverman, the touches of ancient music in the score, a running gag in which an imaginary door closes with "slam", and the way Marshall manages to stage the missing pages of the original manuscripts.

Costumes, set and lighting design by Claire Turner, Ariel Slack and Mark Carter respectively enhanced the production. I watched the performance on line and found the sound fluctuated significantly - my only caveat. Euge - well done.