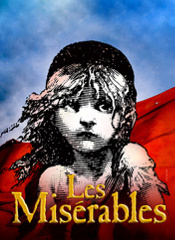 As I walked to Queen Elizabeth Theatre in downtown Vancouver, all that was running through my head was, “Look down… look down… don’t look ‘em in the eye!” It has been over 25 years since my father bought tickets for our family to see a Broadway production of Les Miserables when I was only around 10 years old, and the music and story has been stuck in my head ever since. Suffice it to say, my excitement to experience Cameron Mackintosh’s epic, world-beloved production as an adult was palpable. It is more than just nostalgia; it’s a love affair that has lasted decades. I have held the lyrics and the magic of Alain Boublil and Claude-Michel Schönberg’s musical masterpiece in my heart, unwaveringly.

Something about the story, the songs of sadness, hope, loss, and triumph – I could relate to all of it even as a 10-year-old girl. I identified with Eponine’s unrequited love for Marius. I was indignant for Jean Valjean’s unjust punishment – two decades of slavery for just stealing a loaf of bread was unthinkable to my young mind.

In its 32nd year, Les Miserables is on tour once again, presented by Broadway Across Canada. Before I took my seat, I wandered down to the orchestra pit to see where Schönberg’s powerfully emotional musical score would be coming from. I was shocked to see only a handful of musicians, and briefly wondered how “big” the sound would be. As the curtains came up, and the familiar overture came crashing through with big sounds of brass, cymbal crashes and tympani, I was immediately reassured. the sound was just as big and intense as I remembered it as a child.

Nick Cartell gave a deeply personal performance as Jean Valjean, though Cartell’s naturally youthful face needed some artificial aging to depict the older JeanValjean (cue grey wig and beard). Eponine (played in this performance by Emily Bautista) blew me away. I always had a special love for Eponine and her raw deal in life. Sure, she didn’t come from the same rough beginnings as Cosette, but in the end she was given a much worse lot in life. Her parents, the Thénardiers (J. Anthony Crane and Allison Guinn) were comically crude and dishonest - Crane and Guinne easily stole any scene they were in.

Every person in this ensemble was strong, but most impressive was the tender performance given by Mary Kate Moore as the lovely yet naïve Fantine. Moore’s rendition of “I had a dream” was a showstopper. Also notable was Matt Shingledecker’s portrayal of Enjolras, played with plenty of fervour and fight.

Even at a whopping two hours and 50 minutes, the performance did feel a bit rushed at times. The pacing was quick, with no time lost between scenes. This was truly a whirlwind performance from beginning to end. The circular stage set-up was particularly well done, thanks to the creative efforts of an exceptional set and image design by Matt Kinley inspired by the paintings of Victor Hugo. A theatrical landscape of the French Revolution and gritty 19th century Paris was brought to life in the form of Christine Rowland and Andreane Neofitou’s beautifully done costume design, along with architectural elements carefully curated from tavern to factory to back alleys, painting a wonderfully vivid world that effectively reflected Les Miserables’ themes of broken dreams, love, loss, and redemption. From orchestra to ensemble, this production was absolutely stunning and emotionally arresting in every way.