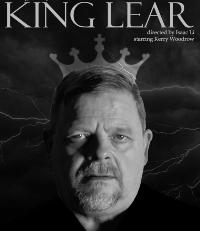 King Lear is one of Shakespeare’s strongest tragedies. It deals not only with his familiar investigations into power and personality, but with complex levels of intrigue compounded by the onset of insanity, raising the question of whether circumstances cause mental breakdown, or vice versa.

Promethean Theatre’s production is a valiant interpretation of the play, mixing modern and old, in a manner that draws attention and appreciation. Li’s direction, in whittling the play down to three hours, is strong. Nothing is lost from the story line, and events unfold in a clear, comprehensible way. Action is well distributed and meaningful.

Kerry Woodrow’s portrayal of King Lear reveals a self-absorbed lout who has been too long on the throne, and who takes his importance and privilege for granted. Woodrow’s performance is especially strong in the early stages, when he is testing the fidelity of his daughters, and when he carouses drunk. His slide into insanity is believable, though it often carries echoes of his drunken behaviour. His climactic rant during a raging storm was less powerful than the dialogue might suggest because it varied little from that of his drunken debauchery. A production note here: Sounds and sights of wind might have helped to fully impact the tumult that dictated the moment.

Taylor Long’s portrayal of Goneril was powerful. She drew the appropriate amount of disgust from the audience with her very believable contrivances and manipulations. Ava Maria Safai played Regan well also, displaying a different personality from that of her sister - calmer in demeanour, but just as evil. Trisha Li’s performance as Cordelia, the truest heart of the three, was admirable, showing credible moments of shock, despair, and determination.

Performances by other key players were noteworthy. Kurtis Maguire’s work as Kent, and as the disguised Second Servant was really impressive, as was Chris Cope’s evil Cornwall. Shel Wyminga’s energy and true-hearted fidelity showed real talent as Edgar, and Joelle Wyminga’s duplicitous Edmund earned the disdain of the audience with a strong, credible performance. Yasmin Tayob’s loyal Gloucester was nicely portrayed, though difficult to hear most of the time. Finally, let us give credit to Syd Castle, whose performance was cheeky enough, confident enough, mischievous enough, to shine as a fine Fool of the Court.

The production staff also deservse mention. Vaillant’s set was simple and sparse, allowing for light and shadow to set the mood. Beaver’s lighting was effective and appropriate to the various scenes, and Ager-Foster’s sound effects were mostly very good, though sounds and sights of a good strong wind would greatly enhance one of the play’s most powerful scenes.

All in all, this presentation of King Lear is an ambitious, stout-hearted production. With some greater attention by some on their lines, and by a few on their voice projection, it can be a truly memorable one. It is definitely worth seeing, and should be on your theatre list.